Open season: Grand Irish homes that welcome visitors – and get a tax break

‘It isn’t a handout. We’ve earned it,’ say owners of some of Ireland’s best-known houses 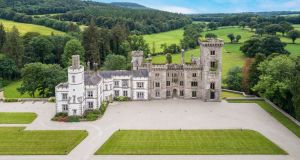 It may not be very often that a vote of thanks is offered to the Irish Revenue Commissioners. Yet without them who would find the way to lock 26 on the Grand Canal near Tullamore?

Who would make a point of visiting the supportive community at Burton Park in Mallow or decide to avail of the “open house” days at no 11 North Great Georges St in Dublin?

And who would find this litany of gorgeous venues for a wedding ceremony? The answer lies in the 35-page list of buildings and gardens approved for relief under Revenue’s Section 482 of the Taxes Consolidation Act of 1997.

We always wanted to restore Boland’s Lock; the scheme eased the burden of costs and we have a great sense of pride in being able to do it

An unlikely source for entertainment, one might think. Yet, as the Irish Georgian Society pointed out in a review submission in 2017, a survey showed that in 2014 nearly three million overseas tourists visited house and castle destinations and 1.9 million went to gardens. Irish interest was 20 per cent houses and castles, 21 per cent gardens, figures which compare with 18 per cent interest in water sports and 7 per cent in golf.

Many of the houses could not open, according to the IGS, without the support offered by the 482 scheme; support which in turn involves local employment while also providing an important resource for architectural, historical and horticultural research.

Certainly, those places with their livestock, landscape and guardians are familiar to their own local communities. In the broader scale of things, however, they might remain among untrodden ways were it not for the list, which provides something like a selective guide-book to 179 properties of significant variety.

Some are already prominent: houses like Lissadell, Russborough, Castle Leslie, Birr Castle, Kilruddery and Stradbally Hall, are among Ireland’s elite venues while other properties are members of the Blue Book or Hidden Ireland - and offer accommodation. There are also more modest homes and buildings of architectural interest. It is, to put it simply, a mixed bunch.

“The scheme relates to what we were trying to do at Boland’s Lock,” says Martin O’Rourke, who, with his wife, Mary, wanted to leave a legacy for their midland connections in Offaly. A legacy has many off-shoots, a nostalgic reference being to Maura Laverty’s story of The Cottage in the Bog (1946). And bog it was as much of the Grand Canal’s route from Dublin to Shannon Harbour in 1797 was laid through the Brosna valley.

The canal was served by horse-drawn boats, not barges. A relic of the last of them, which ended its days in the turf trade, can be seen at the house named for a long-time keeper of the lock.

Designed by Michael Hayes of Tullamore Harbour, the embellishments and costs of the keeper’s house dismayed the canal company’s directors but remain today as a charming and architecturally important element of the canal’s history. “We always wanted to restore it; the scheme eased the burden of costs and we have a great sense of pride in being able to do it,” Martin O’Rourke says.

John Aboud’s home at 11 North Great George’s Street is a 18th-century house restored to a high standard but managing to still have the eclectic look of a home. At one time the home of Dr Charles Orpen, founder of Ireland’s first school for deaf children, it was a roofless building when Aboud began a restoration project 33 years ago. He says the work is not finished.

Dating from the 1770s on a street once regarded as one of the city’s most fashionable areas, it had been a tenement since 1910. “There are downsides to living in a historic house,” Aboud says, “but the upsides are great!”

The 482 scheme will assist with repairs such as the repointing of all the brick-work at front and back. Visitors can enjoy a suite of rooms and a walled rear garden, with their entry fee going to the Merchants Quay charity for the homeless.

Tarbert House in Kerry has been in the Leslie family since 1690. Ursula Leslie, a founder of the America-Ireland fund that she says “has put a lot of money into Ireland,” returned here with her late husband John in 1970. A retired barrister, she used the tax relief to help put the ancestral roof in order as well as repairing 13 of the house’s many windows – through which in 1854 the newly-married Charlotte Brontë must have gazed over the wooded parkland.

Plantation House, barracks and now a farm, Barntick House in Co Clare was built in 1665, renovated in 1740 and survived through the families of Hickman, Peacocke, Lyons and Murphy.

“In 2016 it was a case of do something or let it go completely,” Ciaran Murphy says. “But all the aesthetics are still in place and after the childhood I had out there I had to do something. Revenue was very helpful: once you adhere to the guidelines there’s no problem”.

On a site dating from 1247, Wilton Castle in Co Wexford survived a sequence of owners from the Furlongs to Richard Butler, courtier to Queen Mary Tudor, and his son Edward, who restored the castle in 1599. Passing to the Alcocks in 1649 and reduced to rubble by arsonists in 1923, it was described as a “spectacular ruin” by Mark Bence-Jones in 1988 as it stood on Sean Windsor’s family farmland.

Following his restoration programme, which was completed in 2014, it’s now open and licensed for wedding ceremonies. “It was always going to be a business because that’s the only way to ensure its future maintenance. The tax relief scheme is beneficial in that it can be applied to business income – but basically any financial relief is welcome to a project like this.”

It was not our ancestral home, but it has a history and we managed to get it all back together. Then we found that the tax relief was extremely advantageous

It’s the generation to generation succession which animates other members of this cultural congregation. At Swainstown in Co Meath an unbroken passage through the Preston family has lasted for 300 years, with young Arthur Preston now taking on the management of house and farm.

His mother, the author Caroline Preston, sees the tax relief as encouraging enterprise and innovative thinking because its beneficiaries are in control of what needs to be done and what is affordable. “But it isn’t a hand-out. We’ve earned it,” she says.

Architectural historian Robert O’Byrne agrees that the scheme is quite strictly policed and feels there is no issue about the obligation of public access. “If you receive something from the public purse then you must give something back,” he says.

He sees the merits of the tax relief in very material results, as with the restoration of the Richard Turner conservatory at Rokeby Hall in Co Louth.

Here, Jean and Jeff Young worked on the 18th-century house for 10 years while commuting from their software business in America before finally moving over in 2006.

“It was not our ancestral home, but it has a history and we managed to get it all back together. Then we found that the 482 relief was extremely advantageous to us when we took on the conservatory restoration. However, we’ve both retired now; how does the relief apply when there’s no actual income for tax purposes? We can only wait and see.”

“A wonderful bit of legislation and very helpful to us,” Tom Alexander says of the influence of the tax scheme on the restoration of his early 18th-century Gloster House in Co Offaly.

Recorded by the National Irish Architectural Inventory as having interiors of overwhelmingly playful and almost frivolous appearance with “flamboyant plasterwork” it is also appraised by Robert O’Bryne as a “most marvellous house and an outstanding restoration achievement”.

Galleried, marbled, pillared and parterred, it has reached a perfection surely acceptable to the most discerning of wedding planners. Could it have been done without Section 482? “Well, it gave us the impetus,” he says.

All over the country it has given something else. These are people who are making Ireland work, often in ways that are benign and altruistic. Sli Eile near Mallow in Co Cork is a supportive and restorative community with members living at early 17th-century Burton Park, leased on a 30-year tenancy from Walter Ryan-Purcell and benefiting from the tax relief for the maintenance of the property’s farm, gardens and woodland.

Designed by Edward Darley and surrounded by classical herbaceous borders and an old rose garden, repairs to this protected structure are costly, from Blue Bangor slates for the roof to the glazing for the windows, each of which has 36 panes.

“The 482 scheme ensures that we can continue to keep this house living and inviting,” says White, whose political career began with the successful campaign to prevent mining on Mount Leinster.