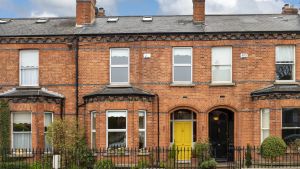 Number 329 Harold’s Cross Road hit the jackpot when the vendors became its owners in 1989. Built in 1892 it was, they agree, “in a bad way”. They could have updated and lived on, but love of both original features and the traditional led to them spending the next 30 years showering TLC on number 329, working patiently and carefully on a refurbishment that also allows for modern living.

They bought, for IR£48,000, a house in which the kitchen was “a sink and a dresser”, where the only heating was a fireplace in every room, where original features were damaged or obscured and where floors needed replacing. They scoured salvage yards, repaired or replaced fireplaces, had cornicing and ceiling roses remoulded, replaced floors with pitch pine sourced from Wexford railway station and, in 2010, added a new roof. All of this, and much more, is apparent as you walk through the house. “It was a labour of love,” they agree. With family grown and flown they are now downsizing.

The kitchen/breakfastroom is a pleasant mix of old and new with a raised, pitch ceiling finished in tongue and groove with velux windows. An alcove which once sheltered a fireplace is now home to a CookMaster Range. “We saved on space that way,” the vendors say of the latter.

The front door has been replaced with a replica. Cornicing and plasterwork in the hallway is delicately elaborate, the ceiling high, with a dado rail leading upwards along the stairs. The floor here, and in the highly traditional reception rooms, is of polished pitch pine.

A small landing on the first return has had its arched window remade so that coloured glass throws light on the stairs. A shower room fits neatly into the return’s compact space.

The bedrooms are off the main landing with the master, en-suite bedroom to the rear. This bedroom, as well as the other two, includes fitted wardrobes. Both front-facing bedrooms have cast-iron fireplaces and the ceilings in all three are high, the light good. A spiral staircase from the landing leads to the converted attic where there are four velux, a laminate floor and lots of eaves storage space.

Outside, a paved patio with granite wall to the side and rear leads to parking for a couple of cars and is accessed via a vehicular laneway.

‘When you’re beautiful, other women absolutely despise you’
Real news has value SUBSCRIBE