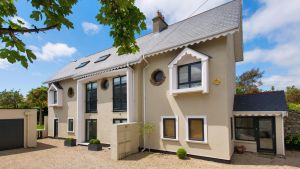 Alongside its more obvious charms: the seafront, the DART, and the lovely village; Sandycove has some great hidden gems. Lucky residents can vouch for a secret Sandycove that is still within a stone’s throw of the rest of this prime location’s best bits.

St Alban’s is a little gated development of a handful of mews-style houses situated behind the façades of seafront period properties. These were built in the early 2000s by developer Robbie Power, and at the time the Victorian house, St Alban’s itself was revamped, and later sold with Savills for €2 million (in 2016). Two other houses in the development, No’s 1 and 2 Scotsman’s Close, were later sold by Savills for €1.2million and €1.05million respectively.

There’s also an interesting bit on the side: St Alban’s is officially semi-detached but a one bedroom 40sq m (430sq ft) own-door house that it is attached to is actually included in the sale. There’s a life tenant at €100 per month, who is not affected by the sale, but the property will be owned by the buyer of The Mews.

Inside The Mews there’s plenty of surface style – especially if you’re a fan of statement wallpaper – but look beyond and it is still a really good place to live.

The three bedrooms are all on the ground floor. The main bedroom, which has French windows to the courtyard, shares its en suite, via a second door, with the other two bedrooms.

The entire first floor is taken up with a very dramatic open-plan kitchen/living space. It has a double-height space, with Juliet balconies and a large feature fireplace at one end, and a sleek contemporary kitchen, with a kitchen island and a double-oven six ring Britannia stove, at the other.

Go up again for what is called a study, but it’s actually a space under the eaves big enough for a double bed, and it has its own bathroom off. It provides an additional 26sq m (280sq ft) of space.

Outside there’s off-street parking and a sweet private west-facing garden tucked away with decking, grass and lane access to Sandycove village.

The large garage has been semi-converted, so it could still be a space for a car, with the advantage of a tiled floor, wash hand basin and toilet.