Refreshed and revived on prime Blackrock road for €1.15m 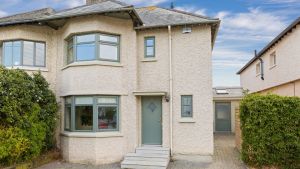 Anglesea Avenue is one of Blackrock’s most popular roads, not least because of its prime location in the sprawling suburb located off Carysfort Avenue, part of the route that connects Carysfort to Mount Merrion Avenue, and just a few minutes walk from the village.

The houses that line the long-established road date from late Georgian terraces to 1930s semis – so there’s variety as well as considerable style.

The owners of number 6 Anglesea Avenue bought in 2008 and while the three-bed 1930s semi had undergone a considerable renovation just a few years before – notably an extension to the rear – they undertook major work before moving in, including reroofing, rewiring and replumbing and removing a chimney stack for an unused and rather large original kitchen range which was taking up too much space.

In 2015 they got the builders in again, this time to replace the windows and build an extension to the side for a large utility and boot room off the kitchen.

That work brought the house to 155sq m/1,668sq ft. Period features include interconnecting doors between the front and back reception rooms. The two reception rooms have matching cast iron and tile fireplaces.

The rest of the ground floor is open plan, laid out in a U-shape around the hall. The back room leads to the dining/kitchen area overlooking a mature and private garden. Where previously there was a country-style kitchen now there are stone-topped sleek modern units.

French windows lead from the dining room on to a large raised south-west facing timber deck. The rest of the garden is lawned.

Upstairs there are three double bedrooms. The third bedroom, which was a large single when they moved in is now a double thanks to the removal of that chimney breast. The owners also renovated and enlarged the bathroom. There’s good storage in the bedrooms and in the units in the dining area and rear reception room.

The couple – now with two small children – have already traded up in the vicinity, and there’s not a sign of a brightly coloured toy or a crayoned wall anywhere in the house because it has been repainted in calm colours and staged for the sale so it is being shown – at the moment virtually – at its very best.

There is off-street parking to the front for two cars, a boon on this street.

The Kerryman working for a charity in Melbourne: 'It's a challenging time'
7

Róisín Ingle: It's only been two months. It feels like 200 years
10