Power up to this Tiger-era house in Sandycove for €3.5m 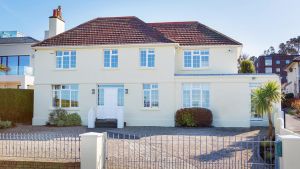 A large four-bed house across the road from Scotsman’s Bay is one of the last of developer Robin Power’s Sandycove houses to come to the market. Cove Lodge, Marine Parade, Sandycove, Co Dublin was one of a portfolio of seafront properties owned by Power and his wife Michelle Kavanagh, most of which they have sold in the past two years.

Cove Lodge was substantially extended and modernised after they bought it in 1999 – when it was for sale for €600,000 – and has been rented since then. Now freshly decorated and staged for sale, the 311sq m (3,350sq ft) house is for sale through Lisney for €3.5 million.

It has a simple, efficient layout, a large back garden and all the comforts of a Tiger-era house. There is a large kitchen/breakfastroom and – not much smaller than some apartments – a 42sq m (450sq ft) main bedroom suite. But Cove Lodge’s strongest feature is its location: it has views across Scotsman’s Bay to Howth, Sandycove beach on the right and Dún Laoghaire on the left.

The downstairs is largely open-plan: a long drawingroom on the left of the front hall with windows overlooking the sea has a marble fireplace, a painted beamed ceiling and an oak floor, like most of the rooms upstairs and down. It opens down a few steps into a large family room at the back of the house. This is one of three separate but linked rooms – the others are the diningroom and a playroom – which all have French doors opening into the back garden.

The large fitted kitchen from Design House in Dalkey has cream units, a stone tiled floor and polished stone countertops and island unit, and a corner dining area with views of the sea.

Upstairs, the main bedroom suite takes up most of the top floor on one side of the house: there’s a small study/dressing area on the way into the bedroom, which looks over the bay. The dressingroom at the back opens into the large ensuite bathroom.

All the bedrooms are ensuite, with one sharing a door into the large family bathroom.

Steps lead up from a patio at the back of the house past raised flowerbeds to a wide 100ft-long rear lawn. There’s room to park a number of cars in the gravelled front garden.

Robin Power sold Fastnet, Cove Lodge’s near neighbour, for €2.1 million and nearby Ossory Lodge for €2.9 million, both in June 2017. White Sails, a large modern house next door to Cove Lodge, currently rented by the South African ambassador to Ireland, is one of the last seafront properties in the Power portfolio.