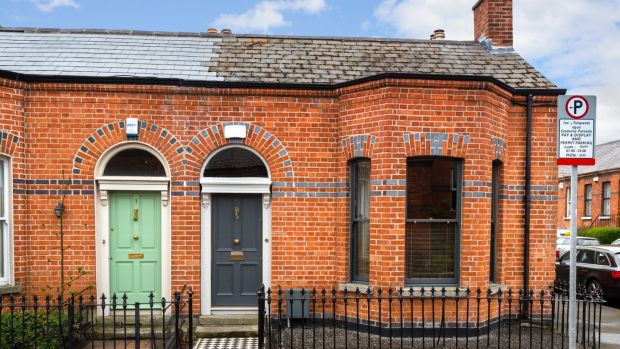 St Kevin’s Parade is a warren of a road linking Lombard Street West to Clanbrassil Street and includes two-up two-down and villa-style properties. Number 2 is one of the latter, a charming end-of-terrace unit that is set on an east-west axis.

The bay-fronted property has impressive ceiling heights that extend to 3.8 metres in its hall and living room, which enjoys the bay window. It is carpeted in a serene shade of grey, with the walls painted a tonal colour and the ceiling and coving picked out in a soft white, further exaggerating the lofty volume of the room. The owners only discovered the real ceiling height some years into their residency when they removed a false ceiling, installed in the 1970s, and restored any gaps in the decorative coving. They opted for Victorian-style radiators to match the cast-iron fireplace.

The house has two generous double bedrooms. One is to the rear of the living room, where it overlooks the garden. The main is upstairs, where the owners sacrificed a third bedroom to cleverly hive out space for an en suite bathroom and walk-in wardrobe – features absent from many other refurbishment examples of this type of property.

The eat-in kitchen is to the rear, where it is housed in the north-facing return, a rectangular-shaped room that also gets southern light thanks to the installation of roof lights to its pitched roof. Here, the units are painted a periwinkle blue with stone countertops.

There is an open fire set into a cast-iron surround in the dining area, which opens out to the west-facing garden. This is a supremely private walled space that is sheltered from most prevailing winds and extends to 22 sq m (237sq ft). While facing the afternoon sun, some of that light is blocked by the gable end of the terrace, but the space offers morning and southern light. There is also pedestrian side access to the street, useful for keeping bins and bikes securely out of sight.

Recent sales on the street include number 6. A different style of property, number 6 is a mid-terrace two-storey that measures 134 sq m, with three bedrooms and a B3 BER rating. It was seeking €875,000, and sold for €870,000 last March. Number 21, a property similar in style to number 2, sold for €305,000 last July, according to the property price register. It was a complete shell, with only its front wall remaining and in need of complete refurbishment.