Lighthouse living in Monkstown penthouse for €850,000

The two-bedroom apartment has views of the Dublin Mountains, and all across the bay 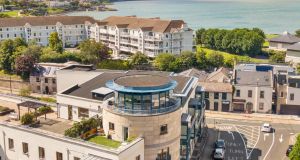 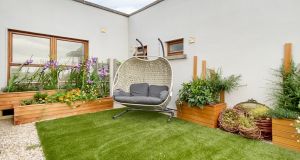 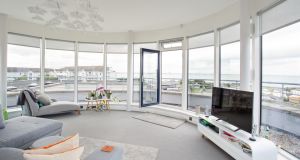 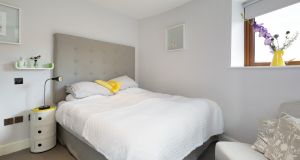 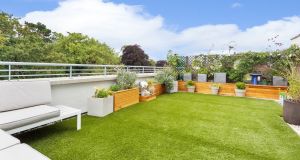 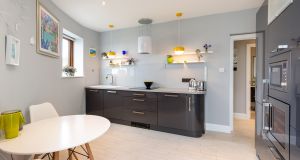 De Vesci House, constructed by Dorville Homes, is a complex of 48 apartments launched in 2000 to much fanfare. Built on the site of the old Top Hat Ballroom in Monkstown, Co Dublin where The Clash, U2 and The Stranglers all headlined, the duplex penthouse – which was seeking £525,000 20 years ago – was purchased by the current owner in 2017 for €610,000.

Now after a complete overhaul that included new Energlaze A-rated windows to keep the place cool in summer and warm in winter, new insulation, electrics and underfloor heating, the property – which extends to 102sq m (1,098sq ft)– is in turnkey condition.

What makes this apartment special is the “lighthouse” room at the top, where 360 degree views take in the Dublin Mountains, and all across the bay from the Poolbeg to Howth and Dún Laoghaire.

While the complex itself has a large roof terrace that would happily accommodate a large gathering of friends, the penthouse has two private terraces. One is situated off the main bedroom – facing De Vesci Gardens and Tennis Club – and the second is off the kitchen with views to the harbour. As the current owner is a keen gardener, both spaces are idyllic spots from which to sit and watch the world go by; laid out with faux grass and a good deal of planting of sunflowers, cornflowers, shrubs and edible delights.

In its current layout, the two bedrooms (one with en suite), family bathroom and kitchen lie on the first floor, while the living space is on the top floor in the round glass room.

It could, however, be reconfigured differently because having the living space and kitchen on different levels feels a bit disjointed.

If the dividing wall between the principal bedroom and kitchen were removed, it would give a larger kitchen-cum-living space, which would in turn better utilise the terrace currently off the bedroom. Then that lovely room upstairs could be used as the main bedroom, making it one of the finest in the city thanks to those views. Yes, the bathroom would still be downstairs, but to wake every morning to that vista and watch marine traffic would be worth it.

The location is ideal, a three minute walk to the Dart and Monkstown village, and a plethora of sports clubs are all within walking distance.

Sherry FitzGerald is seeking €850,000 for the duplex property, which was designed by Niall D Brennan and Associates. The penthouse comes with two underground parking spaces and management costs are €3,000 annually. It is an ambitious price for an apartment, but Monkstown has attained a certain cachet that attracts a premium.