Different colours in the garden will lift or lower your mood 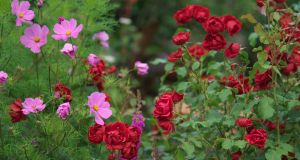 Is there any other topic more subjective – or more divisive – to gardeners than colour in terms of how we perceive it, enjoy it and use it in our gardens?

I know, for example, of those who resolutely hate all shades of yellow, from the pale scented flowers of spring primroses to the attention-grabbing acid-yellow of a laburnum tree in full bloom.

Similarly, I know of others who claim to loathe all shades of red, whether it’s scarlet dahlias, crimson- flowered begonias or the fiery autumn foliage of a Japanese acer.

Likewise, for every gardener who takes great pains to use a palette of gently harmonising shades and hues, there’s another who takes keen delight in using sharply contrasting primary colours.

Which is not to say that we gardeners are in any way immune to passing trends or fashions, because in truth it’s quite the opposite. If you’re a gardener of a certain vintage, for example, then there’s a very good chance (hands up) that you went through an “only greys, greens and whites” phase, a fashion inspired by the influential White Garden at Sissinghurst created by Vita Sackville West in the 1950s.

Or what about the trend in the early moughties for using predominantly dark-leaved/ flowered plants, which resulted in a slew of funereal, gloomy-hued borders? Or the 1980s predilection for pretty pastels?

Back in their day each one of these was considered the epitome of good taste and cutting-edge design, all of which goes to show that horticultural fashions are every bit as ephemeral as any other kind.

Speaking of the thorny matter of “good taste”, it’s one that inevitably, if subliminally, influences our use of colour in our gardens, sometimes hindering our willingness to use it in brave and original ways, or to appreciate the gardens of those who can and do.

I’ve stood in private gardens open to the public, sneakily eavesdropping on other visitors’ muttered conversations as they gleefully agreed on how much they detest “that hideous shade of pink, especially when placed next to that angry red…whatever was she/he thinking?”

Not that I’m any saint in this regard, being just as guilty, much as I try to shake the habit of occasionally deeming certain colour combinations to be visually objectionable. Only last week, while driving by a seaside front garden swathed in hydrangea blooms in violently ugly (to me) shades of puce, sludgy pink and liverish red, I found myself briefly wondering aloud as to the adverse effects it might be having on the mood of its owners before sternly telling myself off for being so judgmental.

And that in a nutshell is the thing about colour in the garden. It has the power to affect our mood in ways that scientists are only beginning to understand, to raise our spirits (as well to lower them), to create an atmosphere of peaceful tranquillity as easily as one of excitement and energy.

For example, those colours that fall into the hot half of the colour wheel – oranges, reds, yellows – give energy and exuberance to a planting scheme. Yet when used too much they can be visually exhausting, demanding our attention to the point where there’s nowhere for our eyes to briefly rest.

Temper these hot colours with plenty of bronze or green foliage, however, and you can avoid that restless, busy quality.

By comparison, cool colours – those on the blue-purple-green half of the colour wheel – are typically perceived as calming and restful, sometimes to the point of dullness.That is why sprinkles of warmth (for example flowers and foliage in shades of yellow or orange) can play an important role in enlivening them. But even this is a simplification too far as there are warm shades of blue, green and purple, just as there are cool shades of yellow, red and orange.

The ways in which particular colours combine in a garden and are distributed and repeated within it also hugely influences our overall perception and enjoyment of a planting scheme.

Repetition of certain key colours creates visually soothing rhythms, as does the use of gentle drifts of particular plants rather than solid blocks. Cool colours can also be used to give the illusion of space/distance, while hot colours give a sense of intimacy.

The quality of light also has a huge impact on the way we see colour in the garden, from the harsh intense sunlight of midday to the mellow, horizontal rays of late evening sunlight. So does the age of the viewer: as we get older we have a tendency to prefer hotter colours. So also does the particular shape and texture of a flower, or even the reflective qualities of a leaf.

All are reasons why it’s well worth following the advice of the late Vita Sackville West, who would always pick a stem or two of a particular plant and walk around the garden with it, holding it next to other plants to see how well they combined together.

To learn more about the science of colour in the garden I recommend picking up a copy of British garden photographer Andrew Lawson’s classic book on the subject, The Gardener’s Book of Colour, which was republished a few years ago by the excellent UK-based Pimpernel Press.

To see it being used in the flesh in flamboyant, artful, creative ways, pay a visit over the next few weeks to some of the great Irish gardens that are open to the public (see my column of May 27th for suggestion). Just make sure to watch out for nosy eavesdroppers and to keep your voice down.

In the kitchen garden/allotment, the yellowing/collapsing of most of their leaves is a reliable sign that garlic and onions bulbs are ready to harvest. To avoid the bulbs rotting in storage shake off any excess soil and then lay them out on a garden table in a warm, sunny spot immediately after harvesting, ideally under the overhang of a roof where they will be protected from summer showers. They can also be successfully dried in a dry, well-ventilated garden shed, glasshouse or polytunnel.

Given the brouhaha over lettuce shortages in supermarkets this spring, it’s well worth growing some overwintering salad crops such as winter purslane, corn salad, varieties of winter lettuce, rocket, mizuna and mustards, especially if you can give them the protection of a glasshouse or polytunnel. Seed can be sourced from good Irish garden centres as well as online specialist seed suppliers such as brownenvelopeseeds.com, greenvegetableseeds.com, irishseedsavers.ie and seedaholic.com for sowing later this month.

It may seem far too early to talk of ordering spring-flowering bulbs but now is the time to do it if you want to get the pick of the best and most fashionable varieties. Some spring flowering bulbs (daffodils are a classic example) also do much better from an early autumn planting. Recommended Irish specialist suppliers include Mr Middleton (mrmiddleton.com) and Beechill Bulbs (bulbs.ie), while good Irish garden centres will soon start to carry stock.