Happy hillside home of a master builder for €1.95m

Developed by a man who built banks, Pinefield House has panoramic views over Dublin Bay 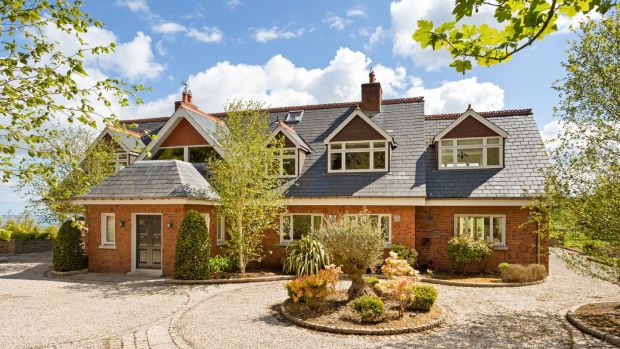 In a 2019 Forbes article entitled “Misconceptions real estate agents have about customer loyalty”, the business magazine argued that client allegiance is not won through gifts or over-the-top gestures – as some agents believe, but by the “need to deeply understand their clients’ goals while being comfortable sharing alternative points of view”.

For agent Stuart Walker of Vincent Finnegan, the loyalty shown by the late master builder Michael Clarke goes back decades. Not only did Walker sell all of the builder’s previous family homes, he also found the site where Clarke finally built his forever home. Now, 32 years later, Clarke’s daughter Rachel and her siblings have engaged Walker to sell their late father’s home, Pinefield House, which is on the market seeking €1.95 million.

MJ Clarke & Company is known for building banks, offices and schools, and its maintenance division started as an emergency call-out service for its biggest client, Bank of Ireland. Clarke took on the O’Dowd O’Herlihy-designed Pinefield House “with gusto”, according to daughter Rachel, who is now the managing director of the company her father established in 1961.

Clarke held tenure as president of the Master Builders and Contractors Association in 1991, and, shortly before his death, in June last year, he saw Rachel presented with the same chain of office, which he wore 29 years previously.

Perched on a height in Glencullen surrounded by lambs and visiting deer in neighbouring fields, Pinefield House was the place where the well-established building contractor enjoyed “four weddings, nine christenings, communions, confirmations and countless happy family occasions”, recalls Rachel. The setting, on more than two acres of well-tended gardens with an orchard, large patio and rolling lawns, has panoramic views to Ireland’s Eye, Dublin Bay and the city.

When constructed, more than 30 years ago, it would have been considered a rural retreat in the countryside, but now, with the M50, and developments and new schools in the village of Stepaside, it feels like it’s just on the edge of the city.  Local hostelries Johnny Fox’s, the Blue Light and the Step Inn are all within 3km, and Glencullen Pitch and Putt is just across the road. Horse riding and livery is available locally and, for fans of mountain biking, Glencullen Adventure Park is less than 2km away.

Approached via electric gates in a lovely sylvan setting, the 360sq m (3,875sq ft) property has four reception rooms and four bedrooms, two of which have great views of the city and Dublin Bay. While new owners may want to update some carpets and decor, the bones of this house – which was built by a man who built banks – are solid, with mahogany parquet in the hallway, triple-glazed Carlson windows and a BER of C1.

As is typical with a builder, the original house was altered after it was constructed. Within eight years, the front of the house and a double garage were levelled to accommodate a new conservatory and entrance, and a double garage with adjoining workshop was built to house Clarke’s increasing passions for wood turning and vintage cars. Over the years more workshops were added and, like the house itself, they were built to last, so could easily be converted to accommodation. One particular unit nestled into tall pine trees would make an ideal teenagers’ den.

Clarke became an accomplished wood turner, spending his later years plying this craft along with restoring vintage cars. In his wood studio overlooking spindle gouges, chisels and unfinished bowls stands a photograph of his wife, Angela, who died three years before him. “They never touched a drink, and would take the ferry to England each year for a holiday, as they were just so happy living here surrounded by nature and their family,” says Rachel.