Handsome Gothic in Rathgar for sale for €1.7m 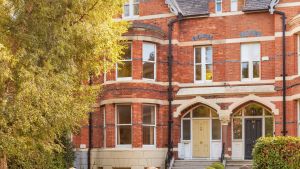 Grosvenor Road, a quiet leafy avenue off Rathgar Road in Dublin 6, has a fine mixture of house styles dating from Victorian times. One of the more interesting designs are those along the terrace which was described by Jeremy Williams in his book, Architecture in Ireland 1830-1921, as “the most ambitious Gothic Revival speculative terrace built in the Dublin suburbs”.

It was designed by Alfred Gresham Jones, whose legacy includes the French embassy on Ailesbury Road, The Davenport Hotel, Wesley College, the Dublin Exhibition Palace and Winter Garden on Earlsfort Terrace. The latter was an ambitious project which included heated winter gardens (all that remain of this incredible structure, known as the Crystal Palace, are a few statues and rustic grotto in what are now the Iveagh Gardens, the original site of the palace).

For reasons unknown, he and his family – at the height of his prolific career in Dublin – emigrated to Australia in 1888, where it is said he established an architectural practice and wrote poetry.

Number 58 lies mid terrace and extends to 304sq m over four floors. The property is in need of total renovation, as it has been laid out as four flats long before it was purchased by the current owner in the 1980s.

Thankfully cheap partitions were constructed internally during the conversion to flats, which means that all the period features have survived – including fireplaces, ceiling roses, coving and staircase.

Removing the internal partitions – to bring the house back to its original purpose of a family home – will give two large reception rooms at hall level. The dining room to the rear stretches the entire width of the property, and the drawing room to the front has a fine bay window which is echoed in the principal bedroom upstairs.

Of interest are the ceilings of the bedrooms on the fourth floor which, due to the roofline, have unusual shapes. Removal of partitions will give five bedrooms over the top two floors.

At garden level lie two main rooms – in neighbouring houses, these are used as a kitchen and family room.

The 14m (48ft) rear garden is somewhat overlooked by a townhouse and would benefit from planting to allow more privacy.