Guinness ancestral home in Wicklow goes on sale for €28m

Beatles, Mick Jagger and Michael Jackson among famous guests who stayed at Luggala

John Lennon’s lyrics for A Day in The Life were written about Garech Browne’s brother Tara Browne, who died in a car crash in 1966.

Sean Connery, Pierce Brosnan, Clive Owen and Keira Knightley all filmed at Luggala, and John Boorman made Excalibur there.

Luggala, the famous ancestral family home of the Guinness brewing family tucked away in the Wicklow mountains, has been placed for sale on the US market with a $30 million (€28 million) price tag.

Currently the home of Garech Browne, the 77-year-old founder of Claddagh Records, and the great-great-great-grandson of Arthur Guinness, the seven-bedroom 18th-century lodge sits on 5,000 acres in a picturesque valley beside Lough Tay about 28 miles from Dublin.

Luggala was most recently on the market for rent, seeking €22,000 per week, and singer Michael Jackson stayed there not long before his death.

“All the things that I like about it make it, in a way, rather different to other places,” Mr Browne told the Wall Street Journal, which featured the property for sale on Wednesday. Luggala is officially for sale by the Trustees of Barbican International Corporation, a Guernsey-based Guinness family trust.

Located in one of the most picturesque parts of the country, which is very popular with walkers, and in close proximity to the capital, Luggala ranks as one of the finest intact historic estates in the country, and is likely to attract international appeal.

The hunting lodge, built in 1787 with its castellated battlements, underwent a lengthy €6 million overhaul from 1996 to restore the main house to its original Gothic glory, when it was originally built by the La Touche banking family. They modelled it on Strawberry Hill, then an iconic home outside London.

Ernest Guinness bought Luggala in 1937 and gave it as a wedding present to his daughter Oonagh on her marriage to Lord Oranmore and Browne. She gifted the property to her son Garech in 1970. It is now, however, owned by a family trust. 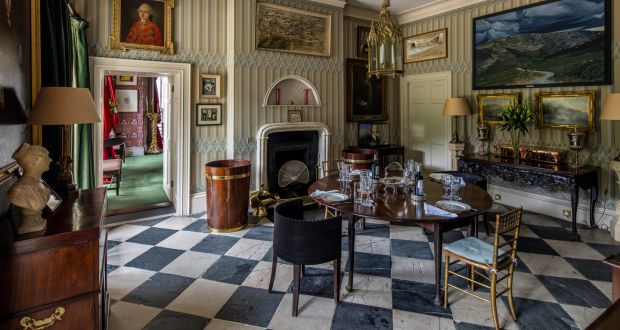 Gallery: Inside the Guinness ancestral home

Browne lived at Luggala for many years and made the home a creative hub where he famously entertained nearly every musician, poet, actor and artist in Ireland – or passing through – for days on end. Guests have included Mick Jagger and Bono, who said of the place: “Luggala has turned out to be our inspiration.”

The Beatles were guests also, and the song A Day In The Life was written about Browne’s late brother Tara, a good friend of Lennon and McCartney’s who died in a car crash in 1966, and is the subject of a recent biography by journalist Paul Howard.

For many, the John Lennon-penned lyrics about Tara Browne – one of the best-known figures of the London social scene during the mid-Sixties – encapsulate the spirit of the decade.

“He blew his mind out in a car / He didn’t notice that the lights had changed / A crowd of people stood and stared / They’d seen his face before / Nobody was really sure / If he was from the House of Lords.”

In 2006 Garech Browne sold over €2 million worth of art and furniture from Luggala and other properties, giving an Irish wake-style dinner accompanied by traditional Irish laments.

The magical landscape – it has its own sandy white lakeshore beach – has been used for films including Zardoz, starring Sean Connery, John Boorman’s Excalibur, and The Nephew, directed by Pierce Brosnan, who called Luggala “a land of magic, mystery, song and dance”. King Arthur, starring Clive Owen and Keira Knightley and 2012’s Astérix et Obélix with Gérard Depardieu also used the estate as a backdrop.

The estate comprises nearly 18,000sq ft (1,670sq m) of living space including the main house at 7,438sq ft (691sq m), with three reception rooms, seven bedrooms and four bathrooms. Because it was built as a mini-castle, the rooms at Luggala are quite modest and cosy rather than over-the-top grand.

There is also a four-bed guesthouse and a further seven lodges or cottages throughout the estate.

The landscape at Luggala contains one of the few remaining 18th-century landscape gardens and includes two native Irish oak woods.

Browne, whose family has lived on the property for three generations, is selling up because he rarely spends time there now, dividing his time between London and Singapore, where his wife, Purna Morvi, lives.

The selling agents are Nick Crawford of Crawfords and David Ashmore of Ireland Sotheby’s International Realty.

Sizeable and stylish Drumcondra duplex for €725,000