Atmospheric estate was the setting for a Stanley Kubrick movie, while the mill boasts a firefighting friendly ghost 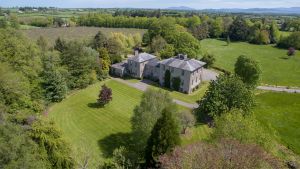 Set in the foothills of the Knockmealdown Mountains, and just over the Vee from Lismore, Castlegrace is one of those rare yet quintessentially Irish country estates.

In the same family since the Georgian main house was built in the early 1800s, there is also the ruins of a Norman castle, a three-bedroom mill house, mill building with its own hydroelectrics, and an additional three-bed cottage which is in walk-in condition.

Set on 120 acres of pasture with orchards (yes, there is a cider press), Castlegrace has always earned its keep. The mill ground corn and wheat grown on the surrounding fertile soil. More recently the estate became the centre of Limousin cattle breeding in Ireland, according to Nicholas Grubb, descendent of the first Samuel Grubb, who originally leased the lands in 1800.

In 1939, another Grubb family descendant, Nicolas’s father, set up Tipperary Products, using the mill to process, as Nicholas puts it, “pretty much everything you could find: blackberries, sloes, honey, rabbits, old hens: they all went by train to London”. Post-war, while rationing was still being imposed in Britain, boxes of sugar were exported, hidden under a layer of fruity mincemeat, for sale on the black market.

So atmospheric is the setting that when film-maker Stanley Kubrick happened upon it he immediately knew he had one of the sets for his famous 1975 film Barry Lyndon. Walk out through the gardens, past the paddocks, and along walks lined with champion trees, to see where Ryan O’Neal had a fight under the 13th century castle’s wisteria hung walls. There’s also a walled garden with ancient yew trees.

The house itself has 650sq m (7,000sq ft) of accommodation, with graceful reception rooms, seven bedrooms, plus additional spaces to work with. The rooms have gorgeous proportions and are beautifully bright. Particularly lovely is the triple aspect drawing room.

It all needs upgrading and modernisation, but with a little love, and an injection of cash to add to the asking price of €2.65 million (through joint agents Shelley & Purcell and Michael H Daniels) this is a family seat to conjure with. There is also the option of buying in one of two lots: taking the house and 78.4 acres for €2million.

The mill itself is especially atmospheric. Nicholas tells me there’s a friendly ghost – Wilbur – who puts out fires. “He has saved the mill more than 50 times,” he says.

Further safety features include an iron-reinforced door on the mill cottage as it used to double as the estate bank house.

There’s also a duck pond and a weir, and the hydroelectric set up is connected to the national grid. Although just minutes from the motorway network at the M8, and an hour from both Limerick and Cork cities, Castlegrace is in a peaceful world of its own.

With its own private fishing and all those amenities it’s tempting to imagine creating a perfectly self-sufficient world all of your own. Or tastefully restoring the whole thing, and throwing it wide open for entertaining.

Tesla’s next-gen Model X: A frustrating €95k drive – but everyone else will love it
10