Former tech entrepreneur’s €6m home back on market for €1.65m 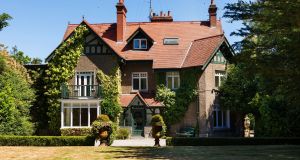 Falmore, which has been vacant for some time, is a lovely property on substantial grounds

The arrival to the market this week of Falmore, a fine Edwardian on two acres in Shankill, Co Dublin marks another milestone in a sorry saga of boom and bust. Once the home of tech entrepreneur John Nagle and wife Joan, the Falls Road property was repossessed last year by Bank of Ireland Mortgage Bank.

The fine six-bed 500 sq m (5,382 sq ft) home with summerhouse and tennis court is on the market this week through selling agent David Dobbs of DNG seeking €1.65million. Last time it came came up for sale was in May 2006 when it went to auction with a guide price of €6million and failed to sell.

Falmore’s fortunes turned when Nagle, founder and former head of Payzone, took out a €5m loan from Bank of Ireland Mortgage Bank against the Shankill family home in order to buy a site and build an extravagant home. The Nagles paid €4.85m for a property they later demolished on Killiney Hill Road in Dalkey, Co Dublin and replaced with a contemporary Miami-style mansion which was once valued at €12million.

When the Nagles moved into their Killiney home in 2007 they were unable to live there due to “substantial design defects”, and returned to live in their former house, Falmore. However when repayment of loans for the construction of the Killiney Hill Road property fell into default it was put up for sale. It sold at auction for €4million in 2013.

When Falmore was repossessed by the bank last year the circuit civil court heard that the total debt on the mortgage stood at €5.7million, and no monthly repayment of €22,600 had been made against the mortgage since 2010.

Despite its recent fortunes, Falmore, which has been vacant for some time, is a lovely property on substantial grounds. An unprotected building, Falmore’s greatest appeal may well be its development potential (subject to the usual planning), given that a neighbouring property has secured planning for a detached house to its rear.

Falls Road has been targeted for development by a number of developers in recent times, with varying degrees of success.