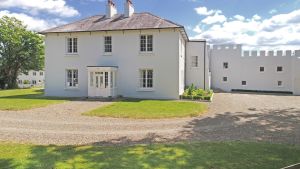 The picturesque village of Castleconnell, located about a 20-minute drive from Limerick city, retains much character from the traditional facades of buildings dating from the 18th and 19th centuries. In the 18th centur y the village was a renowned spa resort where the local waters were reputed to treat every ailment from ulcers to jaundice. Then in the mid-1900s with the advent of tourism, fishing and water sports became the mainstay industry in the pretty village. Lord Randolph Churchill, father of Winston, once described Castleconnell as a “pleasant oasis where time appears to stand still”.

Over the past number of decades the village has become a popular spot for Limerick residents, due to the attractive surroundings, proximity to the city and number of fine period houses, with the benefit of being close to the Dublin road for those who travel between Limerick and Dublin on a regular basis. The village also benefits from a local train station.

Rock Lodge, a protected structure was purchased by rugby coach and former international player Felix Jones in 2015 for €85,000 according to the Property Price Register. “It was completely derelict with no water, waste or electricity and had at least one fire to the property,” recalls Jones who has since moved to Dublin, as his new position as assistant rugby coach to the South African rugby team requires much international travel.

The property, which is listed in the National Inventory of Architectural Heritage as dating from between 1780 and 1800, is described as “an elegantly-proportioned, middle-sized house” noting the crenelated curtain wall as “enhancing the overall setting”.

In terms of size – while the historical listing describes it as a middle-sized house – the fact that it extends to 296sq m (3,186sq ft) it is hardly middle-sized in comparison with homes today. In addition, the property has cut-stone sheds which offer further potential for accommodation, or as a gym and leisure facility as Jones had originally intended.

Conservation architect Alfred Jones oversaw the mammoth restoration which took almost two years, and is to an incredibly-high standard.

Set over two floors, the main house is now linked via a glazed corridor to the old caretaker’s lodge, which has been used as guest accommodation.

The contemporary kitchen by Des Coppins of Blackrock Kitchens opens out on to a courtyard through concertina doors allowing a lovely contrast with the old cut-granite and castellated parapets that envelop it.

A further feature is a handcrafted fire pit with built-in surround seating, which is also set in a cut-stone enclosure.

Privacy is provided by a copse of mature trees to the front and sides, and the entire 1.25 acres of gardens were brought back to life by award-winning landscape architect Emmet O’ Mahony.

“It is a lovely safe spot, there are kids living close by so our kids would play outside every day, but what we really love about the place is the space and ambience of the historical building. It was first owned by an illegitimate son of a lady in waiting of the British royal family and was also used as a military hospital during the second World War as well as being the residence of architect William Edward Corbett who designed the Catholic church in the village,” says Jones.

The impressive five-bedroom house, in turnkey condition, is on the market through Sherry FitzGerald seeking €775,000.