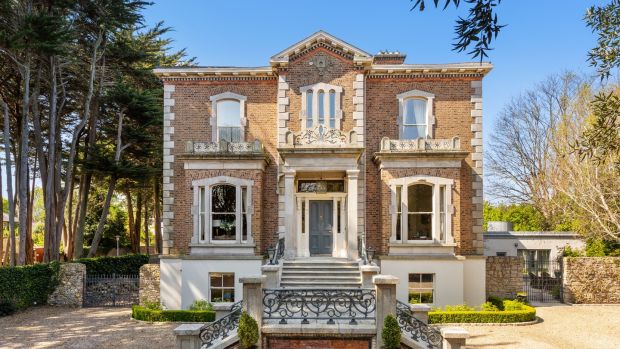 Hatherton, an elegant period residence in Dartry, will hold the same appeal today as it must have done when it was constructed more than 150 years ago. It would appear to be no coincidence that the property was built in 1860, the same year that Milltown Railway Station opened, as the house lies directly opposite what was then the station – now Milltown Luas stop.

The attraction remains; a fine period home surrounded by generous gardens within a stone’s throw of a tram to the city – and located right at the rear gates of the private girls’ school Alexandra College.

While it is so close to the Luas stop, in another sense it’s also miles away. It is set well back on Richmond Avenue South, where high walls and towering trees provide much privacy. In fact there isn’t a sound from the tracks or the school opposite, and sitting at the Rhatigan and Hick kitchen counter looking at the rear garden it has a more bucolic than suburban feel.

It has had its fair share of occupants over the years, from its first resident James E Tyrell, a justice of the peace who had an import business in Grand Canal Harbour, several rectors and a colonel to another justice of the peace, Matthew Minch, who was managing director of Joshua Watson, a wine and spirits merchants on Bachelor’s Walk.

Despite its many incarnations, it is remarkable that the immense period details such as pedimented doors, Corinthian columns and intricate coving survived.

It was purchased by its current owner in 2011 when it was seeking €2.95 million, and later appears on the Property Price Register in 2017 at €4.8 million, but this was an interfamilial transfer and it did not change hands.

Over the course of almost two years, the owner undertook the mammoth task of reinstating Hatherton as a private residence, something it had not been since 1950.

“I remember when this was a dark poky office with men’s urinals at the back, and I thought at the time, ‘what on earth have I taken on?’ ” says the owner, of what is now a fine high-end kitchen that opens into an informal living and dining room overlooking the rear garden.

While some of the former residents appear to have lived in Hatherton on their own, this 696sq m (7,492sq ft) property was designed with entertaining in mind. Upstairs the wide elegant hall framed by elaborate coving and original polished limestone floors could easily hold 50 guests for drinks, and there are a host of reception rooms for whatever soiree is on the cards. Dual-aspect drawing rooms flank either side of the hall and a formal dining room lies opposite a bar beside a butler’s pantry.

Home bars became the “must have” feature in the Celtic Tiger era for lavish homes, but many of them appeared to be rather vulgar displays of wealth that never sat well with the overall design. At Hatherton it fits: the deep crimson walls with an open fire overlooked by a giant stag’s head is more reminiscent of a cosy residents’ snug at a country manor, which is essentially what Hatherton was designed to be.

Downstairs is all about informal family living, where there are two sitting rooms, a casual dining room and two bedrooms. One of the bedrooms has a small adjacent kitchen and is self-contained so would work for staff or an au pair. Another benefit is the substantial two-bedroom 162sq m (1,752sq ft) mews in the meticulous rear garden. Despite its generous footprint, it sits discreetly to the side of the main house with its own private patio, and its cedar cladding helps it blend into the garden setting.

The gardens themselves are lovely and their westerly aspect will be a big box ticked for house hunters in search of a substantial family home. Sitting on almost an acre, the front has room for lots of cars and indeed for further planting alongside herbaceous borders under towering oak trees. To the rear, although the site is in the shape of a square, it is laid out in a semicircle of copper beech and box hedging with pops of vibrant colour from hydrangea and rhododendron in between. In the centre lies a long fish pond dating from Victorian times, where more than 50 fish swim around under a mesh cover, safe from the local hungry heron.

As you would expect the four main bedrooms on the upper floor – like the house itself – have stately proportions with good sized en suites.

Though the oak trees to the front that provide a lovely veil of privacy are protected “remarkably Hatherton is not” according to Rena O’Kelly of Sherry FitzGerald. Buyers for this incredible home will require deep pockets, though: €6.45m to be precise, as the house is just around the corner from Temple Road and Temple Gardens; the most expensive roads in the country, where Alston, at 19 Temple Gardens achieved €10.225 million in 2016.