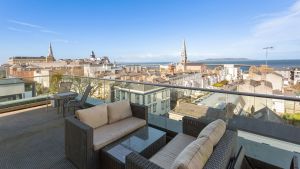 While Dún Laoghaire continues to have something of an identity crisis with its struggling retail environment and frustration over parking and rates, its location at the edge of the water – in what was Ireland’s first commuter suburb – remains one of its primary attractions for boating enthusiasts.

The pier and harbour, which is walked by more than a million people annually, is home to three sailing clubs, in addition to a motor boat club and two umbrella yacht clubs, while the marina itself has capacity for close to 1,000 boats.

It’s no wonder the suburb is also home to the National Maritime Museum of Ireland.

For downsizers or indeed those in search of a spacious apartment, Number 11 at Adelphi House on Upper George’s Street is a fine option and will tick many boxes.

Set on top of a mixed-use office, apartment and retail complex developed in 2008 by Dorville Homes and later purchased as part of a larger loan portfolio by Hibernia REIT in 2014, the duplex apartment occupies a very generous 134sq m (1,442sq ft) of floor space.

But it is the views from Number 11 that will have potential buyers swooning.

Its location from a height on Upper George’s Street takes in the entire scope of Dublin Bay all the way across to Howth, and from the upper floor there are clear views to Bull Island and the Great South Wall of the Poolbeg Peninsula.

Set over two levels, and occupying a corner site which sheds an abundance of light into the interiors, it feels more like a floating house rather than that boxed-in feeling that comes with so many apartments.

Three bedrooms are located on the upper floor, two of which have superb views through entire walls of glass, and the principal bedroom also features a small balcony.

At hall level – there is a second entrance door upstairs at bedroom level – lies a large living and dining space set off a galley style kitchen. From here the eye is immediately drawn out to the wraparound patio which, like the apartment, is very generous in size.

What is also remarkable is the abundance of storage throughout. There are four walk-in units – for cloakrooms, hot presses and the like – and the guest bathroom is vast.

Annual management fees are €3,200, and the property, which has two underground parking spaces, is now on the market through Lisney seeking €695,000.