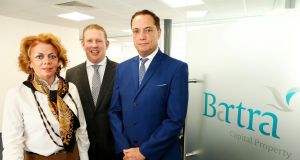 Bartra Capital Property, the company founded by the developer Richard Barrett, continues to acquire across Dublin for development. It is in the process of buying the long-time home of Ray Stafford, the man behind Sudocrem. Grove Lodge, at 45 Woodlands Park in Blackrock, Co Dublin, stands on 0.72 acres. Bartra hopes to replace the existing 1940s house, which has not been publicly advertised for sale, with an apartment block comprising eight one-bed (60-62sq m) and 18 two-bed (78-108sq m) units, each with a parking space.

Woodlands Park is a fine Blackrock address, where recent sales include two modern houses adjacent to Bartra’s site, numbers 43b and 43c, which made €1.725 million and €1.83 million. The street is also near Bartra’s Glensavage site, on Avoca Road, where it obtained planning permission in June 2018 for a residential development despite local opposition.

There is likely to be similar opposition to the Woodlands Park proposal. Bartra only recently lodged a planning application, but objections have already been received, including one from a member of the Davy stockbroking family, who, despite having an address in Rathgar, has objected because of his appreciation of the existing house’s “exceptional design and quality”. Bartra’s consultants, in their conservation assessment, contend that the property is not of architectural-heritage significance.

Nearby, in Dún Laoghaire, Bartra has also acquired the Old School House site on Eblana Avenue. Another property that never came on the open market, it is believed to have been owned by Vigodon, a subsidiary of the Ardale Property Group. Ardale secured planning permission from An Bord Pleanála in October 2017 to build a big apartment complex on the site, meaning Bartra can pursue a development at the site immediately if it opts not to redesign the approved scheme.

In Rathmines, Bartra has acquired an industrial building with redevelopment potential on 0.19 acres at 3 Ardee Road. The Quinn Agnew agency had sought upwards of €2.25 million for the site, which it speculated could accommodate up to 21 apartments, subject to planning permission.

In Dublin 15, the company has acquired Brady’s Castleknock Inn on the Old Navan Road, which was advertised for sale seeking €2.75 million earlier this year. The property was sold to Bartra with planning permission to demolish the existing structure and replace it with a 36-apartment development.