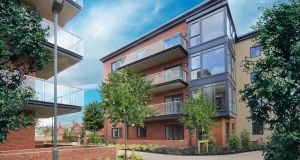 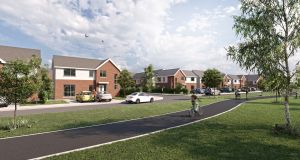 St Joseph’s in Clonsilla comprises two-, three- and four-bed houses, with prices from €315,000

Dublin 15 is blessed with an excellent train service thanks to the Western Commuter Line, which journeys through it. There is a slew of development in this part of the city which isn’t as far out as it may appear on the map thanks to the ease of access through the Phoenix Park.

Closest to the city centre is Clonbern, on the site of the former Phoenix Park Racecourse, which was shuttered in the late 1990s. The Castleknock site was purchased in 1998 by Flynn & O’Flaherty, which built a series of residential developments on the land.

In 2015, it launched Fairhaven, a scheme of three-and four-bed semi-detached homes which are off the tree-lined Castleknock Road, and last year launched Clonbern, an apartment development on the former racecourse lands, close to the main N3 Dublin to Navan road.

Two-bedroom apartments of about 82sq m (892sq ft) will cost from €410,000 through agents Hooke & MacDonald, the same asking prices its units had coming to the market 12 months ago.

The homes will be situated within a 10-minute walk of the Navan Road Parkway stop, where there is a park-and-ride facility on the Maynooth commuter line which takes you into Connolly Station, a journey time of about 15 minutes.

Apart from a short commute, the homes offer the wide-open spaces of the Phoenix Park, where you can walk, run or cycle. Early birds will also get to hear the dawn chorus and the roar of the lions at Dublin Zoo.

Further out along the same railway line is St Joseph’s. Located less than 500m walk from the station at Clonsilla, these homes offer the promise of a journey time from front door to Connolly Station of about 30 minutes – the train travel time is about 23 minutes. Developed by Joe O’Reilly’s Castlethorn Construction, the units at the scheme are being sold by agents Savills.

St Joseph’s offers a selection of good-value homes starting with two-bedroom terraced houses that include a study. These measure 93sq m (1,001sq ft) and are asking from €315,000.

Hollywoodrath is beautifully-landscaped and set on a 67-acre site in Hollystown, Dublin 15. Launched in 2016 by developer Regency, this scheme offers solid, well-thought-out houses.

More competitively priced will be the three-bedroom terraced homes launching in May. Slightly smaller at 112sq m (1,206sq ft), asking prices will start from from €350,000, says Regency’s Patricia Hinch.

The nearest bus stop is about a five-minute walk away at the Carlton Hotel, and this will allow you to connect with both the Luas green line and Maynooth commuter rail service at Broombridge. Alternatively you can do the 15-minute drive to Clonsilla train station.

West of Piperstown and northwest of Mulhuddart is Bellingsmore at Kilmartin in Tyrrelstown, a brand new development of two-, three- and four-bedroom homes with a strong emphasis on families putting down roots.

The scheme by Glenveagh Properties, launching later this season through agents Knight Frank, is across the road from not one but three schools. Parents of children of primary-going age can choose from St Luke’s National School and Tyrrelstown Educate Together, while Le Cheile Secondary School is less than a five-minute walk from either.

Prices at Bellingsmore are not yet confirmed.

Lowdown: Dublin 15
Distance to Dublin city centre: It varies from over 7 km from the Castleknock Gate to more than 15km from Clonsilla depending on which part of this large postcode you live in.
Connectivity: Dublin 15 is well-served by commuter trains that link up to the Green line Luas at Broombridge. The commuter rail service from Maynooth to Connolly serves the following D15 stops: Clonsilla; Coolmine; Castleknock; Navan Road Parkway and Ashtown and on to Connolly where you can connect with the Luas red line. The M3 Parkway line travels direct to Docklands via Clonsilla at peak times but off peak you have to change trains at Clonsilla. Pellettstown is a new stop between Broombridge and Ashtown that is due to open in summer 2021. The area is also well served by multiple bus routes.
Population: The Blanchardstown-Blakestown electoral division lists the population as being 38,924.

‘We would go back in a heartbeat’: Readers share their best family holidays
6

‘I wouldn’t be here without it’: The importance of exercise to teenagers
Real news has value SUBSCRIBE