Killiney pile with paparazzi past for €2.35m

Mansion on 1.3 acres was where Liam Neeson wooed Natasha Richardson 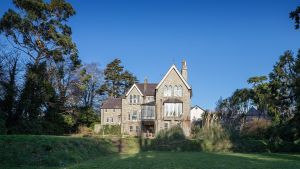 Stonehurst, an imposing high Victorian Tudor revival residence in Killiney has had quite a history in terms of architectural and movie stardom.

The house was designed by architect William George Murray in the late 1850s for a man called Edward Golding, who never had the pleasure of living there, as he died before the house was completed. But his legacy is remembered on either side of the front door where the delicate stained glass windows bear his EG monogram.

Murray, the noted Irish architect whose works include the Royal College of Physicians on Kildare Street and a significant number of buildings on Westmoreland Street, was clearly impressed with his design for Stonehurst, as he built almost a replica as his own residence at Avonmore Hall next door.

In the 1960s English architect Francis Bailey also fell for the three-storey structure lying on almost one and a half acres: “I remember mum and dad would travel from London every weekend in search of a house for us, as they did not want to raise us in London, and mum, though from New Zealand, was of Irish descent and very proud of her Irish heritage. This was the first house they ever purchased and I remember thinking I was going to live in a fairy-tale,” recalls Bailey’s daughter Mary Jackson, who, together with her brother Basil Bailey, are selling the property after the death of their father, aged 95, last year.

Francis Bailey, who was originally from Birmingham, spent most of his time in the Far East, having been sent at the age of 18 to Burma, where he spent four years in the jungle fighting the Japanese in the second World War.

Later, having studied architecture in England, Bailey moved to Kuala Lumpur, where his first commission with the architectural firm BEP was to design a summer palace in Kuala Lumpur for the Sultan of Brunei.

“The sultan wanted it built in 56 days, and I remember all the workmen leaving through the back of the palace as the sultan was walking down the red carpet at the entrance.” recalls Mary.

Bailey was subsequently awarded the bronze medal by the Royal Institute of British Architects for the sultan’s palace.

His speciality was shell concrete using hyperbolic paraboloids (where straight surfaces are pulled and curved like the Sydney Opera House) and one of his most striking works is the international airport at Kuala Lumpur.

Such is the prolific legacy of buildings designed by Bailey in Malaysia and Brunei, that his work – which includes houses of parliament, hospitals and schools – is currently being catalogued by the Irish Architectural Archive.

The family moved to Stonehurst in the 1960s when Bailey retired, and the house was later rented out by them as a film location: “Mum and dad used to sit in the library and all the actors used to come in and have tea with them on their breaks,” recalls Basil.

“I remember Mia Farrow asking dad if her caravan could be moved into our garden [it was located down the road] as the world’s paparazzi laid siege to her at the time.” Woody Allen, with whom Farrow had had a long relationship, had admitted to an affair with her adopted daughter Soon-Yi Previn, and Farrow had come to Ireland with a trail of media in tow. Farrow just wanted to be out of the public eye and concentrate on Widow’s Peak, the film in which she co-starred with Natasha Richardson.

Basil also recalls that Irish actor Liam Neeson “was wooing Richardson at the same time and used to hang about on set, bumming cigarettes from me”. “The place was full of paparazzi, as Allen and Farrow were breaking up and Neeson and Richardson were falling in love,” she adds.

The house, stretching to more than 557sq m (6,000sq ft) over three floors, has incredible details throughout, including gothic windows and fireplaces, along with detailed coving and architraves in bright, elegant rooms overlooking the gardens.

It lies on a site of almost an acre and a half, where an old tennis court and croquet lawn could be brought back to life.

“Mum and dad were not keen gardeners but we had two former tenants living in the basement who used to tend the gardens and keep us supplied with fruit and vegetables.”

Like the house, the gardens, which feature a giant sequoia and eucalyptus, have huge potential, and new owners will more than likely want to plant more trees between the property and the old coach house – where Basil now lives – for extra privacy.

The house, which is now on the market through Sherry FitzGerald seeking €2.35 million, currently has five bedrooms on the top floor, with two more at garden level, but it is all a bit of a moveable feast considering its size.

For new owners, Stonehurst will require deep pockets to bring the property back to its former glory, and will also be a superb task for the next architect who will add their name to the history of this remarkable house.