Know your builder’s limits – they can’t do everything

Consolations of a Property Investor: Builders share unflinching self-belief; I learned this at immense cost 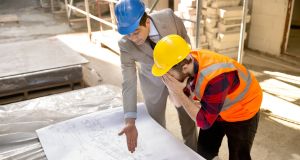 Eventually the structural restoration works required involved a steel frame embedded in a concrete floor tied into the walls with specially designed bolts.

In the infamous “Room 101” of George Orwell’s 1984, the unlucky occupant is exposed to their greatest fears. Burial alive? Impalement? Rats?

In my case, you would only have to whisper in my ear the single word, “corbels”, and you would immediately have me whelping and slobbering in terror.

You might not be familiar with “corbels” – neither was I until they led me unwittingly into the greatest building disaster of my 25-year career in property, nearly bankrupting me and literally bringing a building down upon my head.

Back in my 20s, when I started out in property, I discovered how essential it was to have a reliable, all-round general builder at my disposal.

For me it was a local builder called Steve (not his real name), who was a wizened, wily character approaching retirement age with a lifetime of experience in the building industry. He seemed completely comfortable with every aspect of building work, from sorting out drainage and laying concrete floors to building staircases.

Not only was he very versatile, personable and reasonably priced, but he was able to call on a very useful team of helpers. His son did every aspect of roofing work and gutters; and he often employed a wonderfully talented joiner at highly economical rates. Having a builder like Steve at my side was an enormous relief as it meant that I could trust him completely to project manage a job.

I had little qualms then about taking over a Victorian mansion in a run-down condition. All I would need to do is call down every few days to see how things were going and, crucially, keep paying their wages.

There was a basement in this particular property with a very low ceiling, barely above head height. I discussed with Steve whether he thought we could do anything with it? “No problem”, he said. “We can dig it out a bit, get a few more inches of head height and lay a new concrete floor.”

He had done dozens like them before, he said. Sounds good, I thought, and left it to his very capable hands.

A few days later, he called round to see me at my house – something which had never happened before. “We’ve had a crack,” he announced sheepishly. “Nothing to worry about, but thought I would come round and tell you in person.”

Sensing that something was very wrong, I immediately drove down to the property and discovered that on the wall at the side of the wide central staircase of this substantial house, a very large diagonal crack - big enough to put your finger in - had suddenly appeared.

Following the wall back into the basement, I discovered to my horror that all the bricks in a large section at the bottom had been removed and the wall was almost floating on thin air. Steve, it seemed, had been attempting his own amateurish version of underpinning, but they had removed too much of the wall’s support and it had cracked under the strain.

Reeling from the shock, I immediately called in a structural engineer to make an assessment. He was horrified by what he discovered. Steve had uncovered, on the walls on all sides, the brick corbels at the base of the wall which spread out and provided a strong footing for the weight of all the walls to rest upon. Steve had asked his labourer to smash out these corbels, essentially undermining the foundations for the entire building.

Appalled at what he saw, the structural engineer immediately contacted the local council and informed them of a potentially dangerous building. In a flash, a council official called out where Steve coolly informed him that everything had been done under my strict instructions.

Before I knew it, the council had thrown the proverbial book at me. I was to provide a full structural plan of how the integrity of the building was to be restored and an urgent plan of works.

There was no way of restoring the “corbels”, but finding a replacement for them would be vastly expensive. I spent weeks liaising with a structural engineer, who produced reams of mind-boggling calculations and drawings. I became an expert of the weight compaction properties of sand versus clay sub-bases.

Eventually the structural restoration works required involved a steel frame embedded in a concrete floor tied into the walls with specially designed bolts. The damage that the labourer effected on the corbels in a few short hours cost tens of thousands of euros (at 1990s prices) to put right, money which as a young man I simply did not have.

Ironically, after I had finished salvaging the structure of the building, I no longer had the money to finish the conversion of the basement and had to promise that I would not use them and remove the staircase down into them.

I had learned a very costly lesson that one of the most important aspects of property investment is knowing the limits of your building contractor’s abilities and qualifications. All builders, it seems, share an unflinching belief in their own abilities to do any aspect of building work. For builders – nearly always male – it seems to be an aspect of intense male pride to assert that they can do anything.

I’ve had fitters who are superb at fitting bathrooms, but hopeless at kitchens – one of them stomped off a job when given a snagging list. I’ve had house builders who are great at everything except roofs, which they fit at the wrong angles and with the wrong tiles.

Never neglect to consider whether you are asking a builder to do something beyond their limits: I would hate for you, like me, to have your deepest consciousness haunted by the word “corbels”.

Damian Flanagan is a UK-based property developer and writer @DamianFlanagan