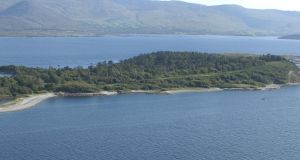 Jacqui Safra, a member of the billionaire Swiss Lebanese banking family, who financed a string of Woody Allen movies in the 1990s, and owns the Parknasilla hotel in Kenmare, has staked a fresh claim in the Kingdom with the acquisition of a private garden island off Sneem in Kenmare Bay.

Rossdohan Island, which has about 140 acres of woodland and gardens and a romantic ruined house has been bought by the Parknasilla resort, which Mr Safra and local businessman Tony Daly acquired in 2012 for about €11 million– a fraction of the €40 million paid by Bernard McNamara for the hotel in 2006. Mr Daly confirmed the purchase of the island at €2 million.

The island is located just few hundred metres across the bay from the four-star hotel which is about to celebrate 125 years in business and was famously stayed in by playwright George Bernard Shaw.

Jacqui Safra, who lives in Switzerland, owns another island nearby – Garnish Island, which he bought in the 1990s and where he has a fully staffed home. (It’s not to be confused with the Garnish Island in Bantry Bay, which is famous for its gardens).

He spends some weeks each year on Garnish, according to Mr Daly who manages the-day-to-day running of the hotel and resort.

Mr Safra was particularly keen to acquire Rossdohan, Mr Daly says, because of a promise he’d made years ago to restore its once-famous exotic gardens.

The island was owned for decades by the Walker family, whose famous Dublin garden and home, Fernhill in Sandyford, is now a public park. The Walkers cultivated Rossdohan with rare trees and specimen plants that gave the island a lush, tropical feel and drew garden enthusiasts from all over the world.

The island was bought in an off-market deal that took years to complete, according to auctioneer Sean Daly of Sherry FitzGerald Daly in Kenmare. He describes it as a “the most beautiful island in Kerry” but admits it’s undergone some difficulties in recent times.

Rossdohan had previously been owned by a German, Manfred Wolsert, who died in 2002 but whose complex estate delayed the sale of the island for many years.

The private wooded island is joined to the mainland by a stonework bridge and is also accessible by boat. A beautiful tidal creek runs under the bridge, while the eastern side of the island has jade-coloured waters and a seal colony.

The main house was a large thatched affair built by a South African family called Heard, but the house burned down about 1949, leaving a romantic ruin surrounded by exotic plants. The Walkers renovated some farm buildings as their holiday home and these remain today.

The intention is to restore the gardens over time, says Tony Daly, who has taken advice from his brother, popular TV gardener and writer Gerry Daly.

“We’d like to bring it back as a beautiful garden,” he says. “It wasn’t bought as a commercial venture, but on a promise, but we will have to take it slowly also. It’s a sensitive area, and our intention is to restore, not develop.”

Jacqui Safra keeps a low profile on his visits to Kerry and is not well known locally, although where he is known, it’s by the name JE Beaucaire. It’s the name he adopted for his film roles in an earlier life. Mr Safra and his girlfriend, Jean Doumanien, produced and financed several Woody Allen movies in the 1990s before a major falling out with the star. He played minor roles in some of the films, under his stage name which he borrowed from the character played by Bob Hope in the film Monsieur Beaucaire. Woody Allen was a one-time a frequent visitor to Kenmare, staying at the Park Hotel on many occasions, according to hotelier Francis Brennan.

A letter to my father: Did you regret leaving Australia?
10