Keeping it cool in a high-end showhome

Buyers expect to be wowed. In Malahide, Elaine Jerrard obliges with a luxury touch 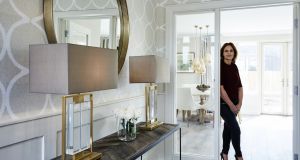 Elaine Jerrard in the showhouse she designed at Clareville in Malahide. 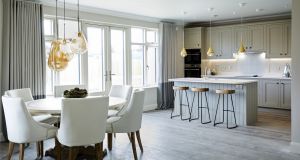 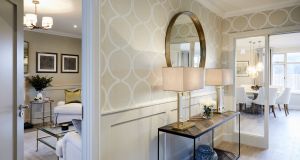 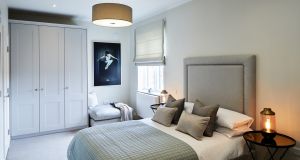 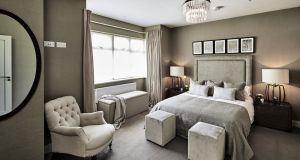 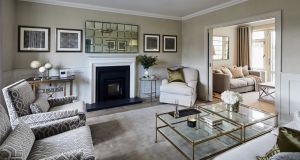 It’s a tricky balancing act, designing the interior of a showhouse. It must look both welcoming and impeccable. It has to appeal to everyone, offend no one. And these days, with house-hunters scouring internet websites and scrutinising online images by the dozen, it has to be on-trend while also, somehow, appearing subtly different to everything else on the market.

“Serene” is the word that comes to mind when, along with designer Elaine Jerrard of Elk House Interiors, I step into the hall of the showhouse she has just completed at Clairville Lodge, a new development of luxury four- and five-bedroom properties on Streamstown Lane in Malahide.

On the site outside, all is clatter and commotion as builders and landscapers race to finalise the streetscape. We’ve tiptoed across topsoil and stepped over planks to get here but, once we close the door, we’re in a quiet world of cool neutrals.

“When I first saw this house, I realised it was going to be bright inside, so that gave me lots of options,” Jerrard says. “But we live in a dark country, so you have to be mindful of that. I would err on the side of light colours rather than darker ones.”

One of her favourite words is “soft”, and as we move through the downstairs space, shades of dove, platinum and silver predominate. “What I really don’t like,” she explains, “is to walk from the front door, and then you get to the back door and you go: ‘Jeez, here’s a purple room all of a sudden’.”

Unity also comes from textural patterning. The shapes on the wallpaper in the hall are echoed in the fabric of the living room armchairs and across cushions and wall prints. It’s intended to draw people in – and it all leads, of course, to the kitchen. “Everything happens in the kitchen. It’s the life and soul of the house,” she says.

With these houses selling for close on €900,000, expectations around kitchen fittings are considerable, which means a process of negotiation with the builders, to push the spec as high as possible.

Jerrard runs her hand affectionately across the Nolan “in-frame” cupboards, opening the pantry-style pair, revelling in the big pullout drawers underneath, having a feel of the wooden racks in the wine cooler. “At this level, people expect a little extra,” she says.

It’s easy to imagine family dinners taking place in this kitchen. Then again, it might be a downsizing older couple who buy the house. This, says Jerrard, is the design guessing game.

“You can’t put everyone in a box, but for these houses there will probably be families – and the kitchen is where everyone is going to congregate.” Hence the statement circular dining table. “If you have kids, a circular table is really sociable and more intimate – and it just fills this space so much better.”

Her rule of thumb for show house furniture and fabrics is: “I won’t use things that I wouldn’t use myself. If it’s not good enough for my house, then I don’t use it.” When it comes to finish, she’s also passionate about details. “Little touches can make a huge difference.”

Between kitchen and livingroom, for example, is a sofa which can – depending on whether the sliding connecting doors are open or not – “belong” to either space. Above it Jerrard has placed a mirror with striking horizontal bands – which draws the eye and plants, in the mind, the idea of relaxing there (not necessarily horizontally) with a glass of wine.

Upstairs, she has used three slightly different shades of wall paint, but not for variety – it’s to compensate for different levels of light.

“Light is everything. If you take a piece of fabric and you move it from a dark corner to a light corner, it changes so much. So when I go on to a site, even if there’s no roof yet, I bring the fabrics and stand here and there to see how they work.

“Builders,” she adds ruefully, “think I’m barking. But that’s okay. The more I do this job, the more I realise it’s all about the fabrics and the textures.”

The immaculate interior of this showhouse looks as if it was beamed up from Planet Perfection. But that’s not how it works. “You start off with a plan, and then things don’t work out, so you have to change the plan,” Jerrard says. “We had beautiful bar stools for the kitchen. They were so, so comfortable. But they dominated the space too much, so I went with neater ones instead.”

She laughs. Perfection, she has learned, means different things to different people.

Up in the master bedroom, for example, she likes to leave a throw strategically draped over the blanket box in the window. But a showhouse has a constant parade of workpersons in and out, doing little fixes here and there. “And I come back and the throw is all neatly folded. I go: ‘Aahhhh!!! What did you do?’ ”

What drew her to interior design, after 14 years of selling houses for Sherry FitzGerald?

“As a little girl I used to do up my room – I was always either painting, or making duvet covers, or whatever,” she says. “The environment where I live has always been really important to me.

“About 18 months ago, somebody asked me if I would help them out with an interior, and I did – and it went from there.”

The real triumph of showhouse design is not so much what you can see at the end, as what you can’t see – that it’s done in the face of a tight budget and an even tighter timeline. Even so, Jerrard lives and breathes for her work.

“I feel as if I should have been doing this job all my life,” she says. “It’s just right. You know when you put on a pair of shoes and they just fit properly? I really want someone to be happy here.”

The Charleton at Clairville Lodge is a four-bedroom detached, A-rated house. Prices start at €900,000. See savills.ie