Craftsmanship evident throughout in this 331sq m redbrick on Military Road 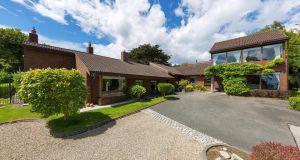 Tanglewood, Military Road, Killiney, is an architect-designed redbrick with six bedrooms for €2.25 million 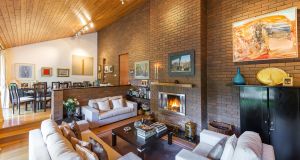 Tanglewood has high, sloping ceilings which add to the sense of light and space 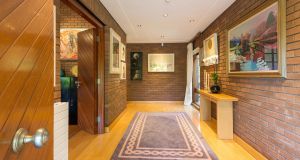 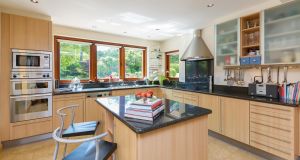 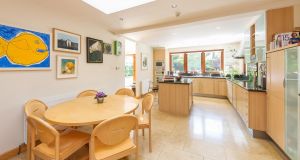 Giving the lie to the tale that architects never manage to finish their own homes, Tanglewood is a lovingly finished six-bed extravaganza on Killiney’s salubrious Military Road.

It’s perched on a gentle hill, which is what first attracted the owner to the area. He had been working on a nearby house for a client, and realised that this was where he wanted to live. “I went round knocking on doors,” he said. One of his visits paid off, and he set to work. That was in 1980 and, after time spent dreaming up the perfect flow with plenty of space and light, Tanglewood was born.

“It was named for the state of the site,” the owner says, though that’s hard to believe given the beautifully maintained gardens including a hard tennis court, an illuminated patio, lawns and lots of mature planting. There’s also a really impressive cedar tree. “It’s about 200 years old,” the owner says. “It’s seen plenty of kids climbing it at birthday parties over the years, and we had a tree house there too.”

It’s easy to imagine what a haven this house would be for children – of all ages. “When our kids got older, they’d look out the window, see the Dart, and run,” the owner says. Did they catch it? “They always did.” A sedate walk leads there in five minutes, or alternatively there’s parking for at least six cars outside.

Inside there are glimpses of outside everywhere, with dual-aspect rooms and cleverly placed windows. It’s done in redbrick, with sloping hardwood ceilings that don’t feel dark, because there is plenty of height. The kitchen is bright and welcoming, and leads through to a family room, and on to a playroom. To the immediate left is a fine split-level livingroom/diningroom where excellent parties are guaranteed.

The bedrooms are off to the right, in what amounts to a separate wing. The master has a large dressing area and ensuite, and views of the tennis court. There are two more bedrooms on this level, plus a study that could be a fourth. Add in the two upstairs for a total of six. The owner says that the dividing wall upstairs could be removed easily, providing a massive games room – or whatever you fancy yourself.

From copper piping to careful pointing, the high quality of materials and craftsmanship is evident throughout. The staircase was designed to resemble the sails of a yacht. “It’s the sea views,” he smiles, adding that he got to know so many excellent craftspeople through his work that it was a pleasure to work with them on his own home.