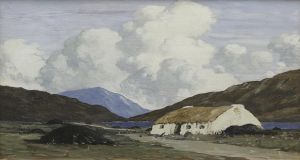 Paul Henry wasn’t the first visitor to fall for the west of Ireland, but few have been more inadvertently influential in marketing the region’s appeal. The Belfast-born (in 1876) artist moved to Achill Island off the coast of Co Mayo in 1910 and lived there for a decade. The paintings he made were hugely popular during his lifetime, and, almost 60 years after his death in 1958, he continues to be one of Ireland’s favourite and best-selling artists.

Henry often painted the people of Achill and Connemara, and some of his most famous depictions include The Potato Diggers and Launching the Currach, both in the National Gallery of Ireland.

However, he is best-known for his landscape paintings that are essentially variations on a theme: mountains, lakes, the sea, bogs, white-washed thatched cottages, stacks of turf, cloudy skies.

Almost a century before the “Wild Atlantic Way” was invented these images captivated the public then and ever since. In 1925 the London, Midland and Scottish Railway Company used one of his Connemara paintings for a publicity poster. It was a huge hit, and reproductions sold like hot cakes. That year The Irish Times commented: “If thousands of people in Great Britain and America have been led this summer to think over the claims of Ireland as holiday ground it is largely through the lure of Mr Paul Henry’s glowing landscape of a Connemara scene.”

Two years later, following an exhibition of his paintings in London, the Spectator magazine’s art critic described Henry as “probably the best painter that Ireland has ever produced”.

Henry died at his home in Sidmonton Square, Bray, Co Wicklow in 1958. His obituary in this newspaper noted: “All over the world thousands of men and women have had their first glimpse of the Irish landscape in reproductions of Paul Henry’s paintings. Apart altogether from the famous posters – and copies of the famous ‘Connemara’ poster published in 1925 are still to be found on railway platforms in China and Mexico, West Africa and San Francisco – reproductions of his work on Christmas cards and postcards, calendars and illustrations torn from books have carried a sudden tang of the strong salty air of Connemara to the farthest corners of the globe.

“Only two years ago [in 1956] 10,000 copies of one of his posters – the Achill landscape from which it was reproduced was, fittingly, one of the artist’s last major works before his sight failed – were sent to the Continent by Bord Fáilte. It is no exaggeration to say that Paul Henry did more than any other man to popularise the Irish landscape.”

Henry’s landscape paintings are in public galleries and museums but they also turn up at auction a few times every year and almost always do very well. The top lot in Adam’s “Important Irish Art” auction in Dublin on Wednesday evening (September 27th) is lot 52, his A Connemara Cottage – estimated at €60,000-€80,000.

The oil-on-board, measuring 14in by 16in, is a typical example of the artist’s style. It has not been seen in public since it was bought directly from the artist in 1931 by an old school-friend of the artist’s from the Methodist College in Belfast, and it has remained in their family collection ever since.

By coincidence, another Belfast-born artist – of a later generation but rather less talented – Gerard Dillon was also captivated by the west of Ireland and spent time there in the 1950s. His painting A Wet Day, Ireland was the top lot in de Veres’ auction this week and he also surfaces at Adam’s with, among other paintings, lot 23, Cottage Interior, an oil-on-board, estimated at €25,000-€35,000.

Dillon shows not the landscape here but instead the reality of life indoors in one of those thatched cottages. An elderly figure is dozing beside the hearth in the sparsely furnished cottage as hens feed from crumbs on the floor. Saucepans and a teapot sit on a grate over a turf fire.

A very different Irish artist’s depiction of rural life – this time a 19th century English village – can be seen in lot 118, A Young Girl in a Village by Walter Frederick Osborne (€20,000-€30,000) dating to around 1887/1888 when the artist was working in the rural countryside and villages of Berkshire. The painting depicts a young girl wearing a straw hat and bow, together with a boy and donkey in deep shade avoiding the heat of a mid-summer’s day.

Of the 224 lots – paintings and sculpture – in the auction, 100 have been consigned by the broadcaster UTV which is selling its corporate art collection. It’s likely to appeal especially to collectors in Northern Ireland – especially the lot Laganside at Dusk by Basil Blackshaw (€40,000-€60,000) that was commissioned by UTV from Blackshaw and shows a vista of Belfast along the Lagan.

Mind that cat – and its impact on wildlife
5

Christmas dinner: Tips and shortcuts from the experts
Real news has value SUBSCRIBE