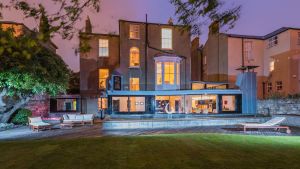 Towards the end of the 1800s horse riding was a popular pursuit in Dublin 6. The Rathmines and Dublin Lantern reported on “well-known equestrians of the area heading off for Sandymount for a gallop”.

At the same time a new sport was emerging, but giving rise to many accidents in the Rathmines and Rathgar area – that of cycling (in fact the problem persists today for commuters who use La Touche Bridge at rush hour).

At a meeting of the Urban District Council in 1896, it was concluded “cyclists are more dangerous than horses” and the area of Kenilworth Square was set aside solely for cyclists wishing to pursue their hobby.

Overlooking the vast green – which is now the playing fields for St Marys College nearby – is number 32; a detached double-fronted Victorian property with a substantial 467sq m (5,027sq ft) of space.

The property is accessed by dual granite sweeping steps to the formal living areas at hall level and also through a courtyard at garden level which is the preferred entrance when the family are entertaining.

Purchased by the current owners in 2002 when it was the headquarters of the Irish Veterinary Union, they set about transforming the house back to its original residential use.

What is most striking about the property is the kitchen; “we wanted to get a feel for the house before we added the extension” say the owners who engaged architectural firm Ross Cahill O’Brien to design the curvilinear room at garden level.

Tell-tale signs that the owner is in the restaurant trade are immediately evident.  The island which sits amid the Siematic kitchen is quite possibly the largest hob in the country to feature in a family home.

“The kids call it my altar,” says the owner of the vast island which has four colossal gas burners and a central hot plate capable of heating to 300 degrees Celsius. It was custom built by Angelo Po – the commercial kitchen company – and cost in the region of €25,000.

While commercial kitchens are generally cold and soulless due to a preponderance of stainless steel, there is a perfect balance here between steel and wood.

Even the extractor fans are hand-painted and sit flush within a roof that was built specifically to accommodate them. In addition to a commercial steam oven – large enough to cook four turkeys, and domestic Gaggenau appliances there are what the owner calls ‘his and her’ Liebherr fridges.

The extension runs along the entire back of the house, and is also home to a dining area and living space which overlooks the rear garden through giant picture windows.

Also at garden level is the cinema room, the focal point of which is the old granite hearth, though today it acts as a frame to a window overlooking the courtyard.  With the press of a button a screen descends from a flush panel to reveal a colossal monitor which is linked to a Lutron lighting and sound system.

Also at this level are a games room – large enough to accommodate a full size billiards table – a gym and steam room.

At hall level are three elegant reception rooms – one of which is used as an office. These rooms retain all their period features although the furnishings are at odds with the building’s heritage.

While the property is listed as having three bedrooms – the master suite occupies the entire width of the property, new owners have plenty of options should further bedrooms be required.

The gardens, designed by Noel Dempsey feature hydrangea, cedar decking and a conference pear tree – the bounty of which are used for making perry. Underneath the pear tree lies a hot tub – perfect for star gazing on winter evenings.

It’s not often that a property in Dublin 6 requires an electric fence, but the owners installed a slim wire around the pond in order to detract a greedy heron from dining on the Japanese Koi.

The owners are downsizing, but in a sense come as part of the package as they are building two mews in the rear garden. While this will reduce the size of the garden, it will remain a sizeable plot. Should new owners require advice on the workings of their masterchef kitchen – advice will be close at hand.

Savills is seeking €2.9million for the property which is in turnkey condition.

Do Irish people hate babies? Our irritation with them is embedded in our culture
4