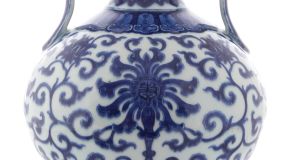 Both are classic examples of auction “sleepers” – the term used to describe items which have been massively, and unintentionally, undervalued but are spotted by at least two bidders who believe the true value to be far, far higher.

Chinese “sleepers” have emerged at Sheppard’s and other Irish and international auction houses during the past decade – and achieved jaw-dropping prices – as a generation of newly-rich Chinese collectors roam the world seeking to buy back items associated with the country’s imperial past.

But a bemused public may wonder why does this keep happening?

Auctioneers say that Chinese ceramics can be very difficult to value with absolute precision even by the most eminent experts. Items continue to slip through the net – to the delight of vendors and, of course, the auctioneers who earn whopping commission on such sales. Of course, it’s not just Chinese antiques that can cause a surprise. For example, at Adam’s auctioneers in Dublin in April this year, a painting of Christ with a top estimate of €800 sold for €120,000. But, in recent years, it is Chinese “sleepers” that have attracted most attention. The first major such sale in Ireland took place also at Sheppard’s in 2010 when another blue-and-white Chinese vase valued at around € 100, and consigned by a Carlow family who thought it was only of ornamental value, was bought by a London dealer for € 110,000. Since then, there have been quite a few spectacular prices achieved at Sheppard’s and other auction houses both here and overseas.

Yet despite all the publicity, new finds continue to surface. The vase at Sheppard’s last Saturday was made in the 18th century during the reign of the Emperor Qianlong and is decorated with a pattern of flowers and the Chinese character Shòu (meaning “longevity”). It had been on display during a two-day viewing of the auction at the Tower in Kilkenny Castle before being returned to the saleroom in Durrow to go under the hammer.

Very few people attended the viewing in person but collectors worldwide had access to the catalogue via the internet. Sheppard’s has a large international following among collectors of Chinese ceramics and its auctions regularly attract online and telephone bids from collectors and dealers in Beijing, Hong Kong and Shanghai and from specialist dealers in London, Paris and New York. Collectors and dealers – or their representatives – fly to Ireland to attend viewings in person having spotted an item online.

On this occasion, the winning bid was made by telephone from a bidder in Paris who was, apparently, a Chinese collector visiting the French capital. It is believed that the bidder (or a representative) had discreetly visited Kilkenny Castle to assess the vase a few days earlier.

Why was it so valuable?

The vase was catalogued as “Qing Period” – a reference to the imperial Qing dynasty that ruled China from 1636 until 1912. But the bidders believed that the vase had a personal connection to the 18th-century Emperor Qianlong who reigned from 1735-1796 and was a major patron of the arts and a collector of carved jade, bronzes and ceramics. The vase was likely to have been either part of his personal collection or to have been given by him as a gift to, perhaps, a visiting dignitary.

Sheppard’s said there is an “imperial seal mark” on the base of the vase (see picture). The winning bidder must be very confident about its provenance because in addition to the hammer price, an additional buyer’s premium (essentially the auctioneers’ commission) is added which brought the total cost to over €900,000.

How did the vase end up in Ireland? Auctioneer Philip Sheppard said it had been consigned to their saleroom a few months ago by “a man in Dublin who would have been pleased to get €800 for it”. The man had inherited the vase from his father and it had “come down through the family from an ancestor who had served in the British army”.

Sheppard’s duly catalogued it for auction with an estimate of €800-€1,200. After the auction, Mr Sheppard phoned the man to tell him the news and “there was a long moment of silence – he was stunned”.

While the chances of finding a similar vase in, say, a car-boot sale or your grandmother’s china cabinet may seem Lotto-style improbable – it is possible. A vast quantity of blue-and-white Chinese porcelain was imported into Ireland and Britain in the 18th and 19th centuries which is now very collectible and can fetch high prices. Examples turn up regularly at auction.

But the pieces that hit the jackpot need to have an imperial connection. Many pieces of imperial porcelain were looted by French and British troops during the Second Opium War when, in 1860, the imperial Summer Palaces in Peking (now Beijing) were ransacked. These palaces contained vast collections of ceramics and other objets d’art that had been assembled by a succession of emperors including Qianlong.

During the Boxer Rebellion in 1901 there was also widespread looting by British troops in Peking. An unknown number of the looted porcelain items ended up in Europe. The looting and the consequent loss of important items of heritage still rankles in China. Chinese collectors are spending fortunes to find, buy and return these items to China.