Tee up to Green Park and a swish upgrade for €2.5m 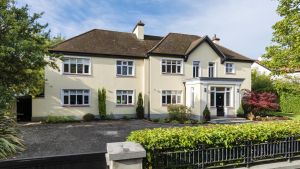 There was so little pressure on land in the 1930s in what were Dublin’s suburbs that when John Kenny, one of the busiest builders of his day, bought a nine-acre site at the Churchtown end of Rathgar’s Orwell Road his plan was to build just 10 houses.

In a scheme he called Green Park he offered buyers the choice of eight house styles with the properties built in a short cul-de-sac and on the front of the road facing on to Milltown Golf Club.

Number 3 Green Park, the property now for sale, faces the golf club, and was one of his larger styles, two storey and notably wide with an integrated garage.

In 2008 it underwent a massive renovation that changed the look of the house, the metal windows replaced by Rational ones, the modest front door enhanced with a large porch, and a new roof incorporating a pitch to the front over the entrance.

Painted yellow and white the 350sq m (3,767sq ft) detached house is set back from the road with parking behind electric gates, the front giving little indication that behind is a vast west-facing garden.

Once inside signs of the 2008 renovation are also immediate. Large format glossy white tiles run from the front entrance back to the newly widened hall and on to a new room added to the rear and used as an informal living room.

That is one of three reception rooms and there’s also a home office. The kitchen was designed for family living with plenty of space for an eight- or 10-seater dining table, sofas and sleek kitchen units.

Its two picture windows look out over the front garden and the room opens out to the rear garden via double doors. There is a utility room also opening to the rear. Upstairs there are five double bedrooms, three with en suites as well as a family bathroom. All of the bathrooms are smartly tiled and with quality contemporary fixtures and fittings.

The house featured in Plan magazine in 2009 for the high spec energy efficiency measures used by its architect Niall D Brennan & Associates; these include a whole house mechanical heat recovery system, a high efficiency boiler, solar panels, and extensive insulation throughout including external insulation wrapping the entire building.

Number 3 Green Park has been a rental for the past 10 years and was furnished until recently by the now moved on tenants. It has been painted throughout, its carpets cleaned and staged for the sale which is through Lisney asking €2.5million.