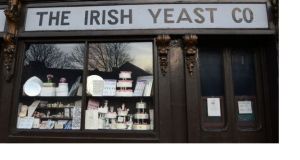 The Irish Yeast Co opened in 1894 in what had been the foyer of the George Hotel.

One of Dublin’s oldest businesses and best-known shopfronts, the Irish Yeast Co, has sold for an estimated €850,000. It is understood that the historic listed property, sandwiched in a prominent row of buildings opposite Trinity College on College Street, was purchased in recent weeks by Doyle’s pub, which operates a large premises on the same block .

Number 6, located between the Westin Hotel and Doyle’s, dates from 1750 and was placed on the market less than six months ago when a large “Investment Opportunity” sign was placed over the door.

The asking price at the time was €675,000, with up to eight bidders eventually driving the price upward.

The sale of the Irish Yeast Co marks the end of an era for the 130sq m (1,399sq ft) premises that, up to two years ago, steadfastly continued to trade its specialist baking products long after big name retailers had all but consumed the city centre’s traditional shopping streets.

Its sale through estate agent Alan Denihan of DNG followed the death of proprietor John Moreland, who operated the business and lived overhead for more than 60 years. When the four-storey property went on the market in February, Mr Denihan described the building as “a time capsule. It’s like a set from Strumpet City.”

The business first opened in 1894 in what had been the foyer of the George Hotel, which later became a bank and subsequently reverted to what is now the Westin Hotel.

As a listed structure, the development opportunity for the building is limited, although its location alongside the existing Doyle business will have strategic appeal for owner Declan Doyle. The Carlow businessman also owns Bowe’s pub, one of Dublin’s last original Victorian pubs, and a former Ladbrokes betting shop both located directly behind the Dublin Yeast Co and adjoining Doyle’s pub.

Since 2014, Mr Doyle has sought planning permission to incorporate the betting shop into Bowes and expand the entire area into Doyle’s.

The Dublin Yeast Co frontage would deliver better and more prominent access from College Street to any reconfiguration of these premises, than the existing access from quiet Fleet Street to the rear. Mr Doyle could not be contacted for comment.

The four-storey building was sold with contents in place, including a vast array of baking paraphernalia – foil-covered cake stands in all sizes, faded bunting and old style bride and groom figurines with hand-written price tags.