Three weeks and two skips later, we were ready to sell

Moving On: Ignoring advice, we just chose an agent we knew for years 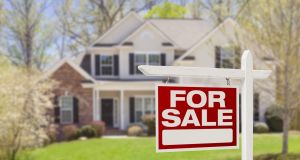 “That Sunday afternoon we were flabbergasted to see a carnival of what we could only deduce were interested parties crawling past the house and peering in our sitting room window.”

To avoid the stress of bridging finance we had to sell our home before we bought elsewhere. We found ourselves around the kitchen table more often than in front of the telly, as we tried to cover all the possibilities that might arise when selling. The lists were endless and so absorbing, but can be roughly summarised into finding the right agent, agreeing a timeframe/price and preparing the house for viewing.

We wanted someone we could depend on, someone who knew their business

I was always a curious observer of estate agents, sometimes scrutinising them as much as I did the property on view. These days they are all qualified, regulated and insured, but so much more is expected from a selling agent beyond their property expertise. It takes a brave soul to regularly navigate the maelstrom of vendor emotions, vulnerabilities and apprehensions while also remaining cheerful and welcoming.

Their many other roles include: life coach, psychologist, financial adviser, marriage/bereavement counsellor and psychic. Only the foolhardy and very short-sighted would dispense with their advice during a complex transition of this magnitude.

A few similar homes close to our own were sold in recent years so I happily observed the comings and goings of potential buyers, always preceded, or followed, by the requisite agent. I also welcomed reports from neighbours about their own experiences with different agencies which later stood to me greatly.

Not for us were the ones who looked hungover or late, or those who couldn’t work out the mechanics of the front gate, or light the gas fires. Nor did we want tight-suited or high-heel-teetering youngsters with beaming smiles but little local or structural knowledge. We wanted someone we could depend on, someone who knew their business and someone who could engage with potential buyers authoritatively, but not arrogantly.

My usual advice to home sellers is to ask three reputable agencies to tender for the business, providing the advised selling price, costs and fees. Then, go with your gut feeling, not the highest price or lowest fee.

Ignoring all of this advice of course, we chose someone who we had known for years and whose professionalism and expertise we respected. We felt in safe hands.

When we went to market in early April, the asking price was a small slice short of what we would be happy to accept. Meanwhile we took on board the agent’s simple decluttering tips and sage words about displayed items of value. But of course this was not enough for us.

Even though the interior had been painted recently we repaired every scratch and mark acquired in the interim. Visits to the garden centre in March proved bleak. I despaired about the havoc played by the snow on our crowning glory, the garden and its 30 pots. But clearing out the attic eaves wins the watch.

The day dawned when the house was going up on websites

A mismatch of old printers, monitors, 17 suitcases, 8 dining room chairs and two decades of Christmas decorations were removed. School books, reports, old files and long idle gym and skiing accessories were dumped. Among the rest, we unearthed my 44-year-old sister’s tiny pink potty (our late mother had asked me to keep it for her during their last house move) and enough books to fill several libraries.

Three weeks and two skips later we were ready. Pictures were taken, brochure designed and copy agreed. I even drew up a list of chores to be done before leaving the house when a potential buyer was viewing. I also wrote a list of selling points (not in the brochure) for the estate agents, mainly about the garden, but I doubt this was ever consulted.

The day dawned when the house was going up on websites. That Sunday afternoon we were flabbergasted to see a carnival of what we could only deduce were interested parties crawling past the house and peering in our sitting room window. A traffic jam ensued and it became intrusive enough to move us to the kitchen. But the interest excited us beyond measure. My God, we were going to be swept off our feet by the number of offers.

We now knew with more certainty what we did not want to live without. Our must-haves included a south-facing private rear garden, an open plan living area and at least two bedrooms. We would like some good walks nearby, but the icing on the cake would be a view.

Russian oligarch tees up €85m sale of Dublin’s Morrison Hotel
What sold for about €500k in Ballsbridge, Dalkey, Sallynoggin and Lismore
Delgany Georgian on reduced lands sold for €1.3 million
Cookstown land earmarked for 1,156-unit apartment scheme
What sold for about €645k in Clontarf, Dún Laoghaire, Kilmacud and D18

How do I find love as a transgender individual in Ireland?
7

Michael Harding: ‘I could hear my boots under the bed, crying all night’
9

10 great places for a family lunch in Ireland
10