Yes, it’s Valentine’s Day, but you still want your own side of the bed, right? 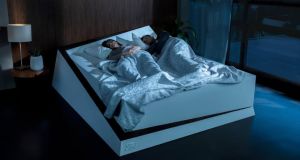 Ford’s stay-in-your-lane mattress: there are other things couples do in bed apart from sleeping, which involve being quite close together, and during which being ‘nudged’ probably isn’t ideal

In the same week that a Kickstarter campaign was set up to fund the production of LoveSync, an interactive button encouraging partners to signal they are in the mood for sex – as opposed to just, you know, telling them – the carmaker Ford has suggested an even less romantic product: stay-in-your-lane mattress technology for couples. Happy Valentine’s Day!

Ford’s mattress design would include a mechanism to “nudge” partners to their own side of the bed if they began to dominate the space. According to studies (no doubt funded by bed manufacturers), a quarter of us report sleeping better when we sleep alone, which does make some sense, given there is no risk of duvet larceny, or disruptive snoring, by your other half.

But the idea of couples actually sleeping in separate beds is rather saddening. It seems just a step away from the set-up of Helena Bonham Carter and Tim Burton, who lived in adjoining houses when they were partners.

Your significant other touching you in bed isn’t unexpected, is it? It’s sort of the point of sleeping together, in both senses of the term

Perhaps it’s the practice of sleeping in separate rooms that Ford is trying to avoid, although it remains perplexing why a car manufacturer actually cares. (The mattress is at the prototype stage.) Maybe less tired people buy more cars? There is also, surely, a glaring issue with this mattress: there are other things couples do in bed, which involve being quite close together, and during which being “nudged” probably isn’t ideal.

“Humans are most vulnerable when sleeping,” says Neil Stanley, the author of How to Sleep Well, “so we’re programmed to wake when something or someone touches us unexpectedly.” The thing is, though, your significant other touching you in bed isn’t unexpected, is it? It’s sort of the point of sleeping together, in both senses of the term.

Don’t get me wrong: none of us enjoys being locked in a vice-like grip by the one-night stand we cannot wait to kick out at first light, but spooning with someone you actually like, nay, love; holding hands; “snuggling” (so sorry) – all of these things are quite nice. So I won’t be investing in Ford’s mattress. – Guardian