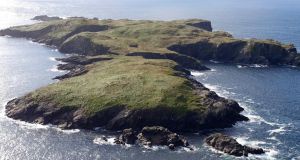 High Island or Ardoilean lies off the west coast of Connemara, close to Claddaghduff and Inishbofin.

A deserted island off the west coast with a history of human settlement stretching back up to 3,000 years has gone on sale with an asking price of €1.25 million.

High Island – also known as Ardoileán – spans 80 acres and lies about 3.5km off the Connemara coast and, at present, is home to the ruins of an ancient monastic settlement, seals, thousands of birds and not a whole lot else.

However, the auctioneer who put the island on the market last Friday has said buyers could potentially secure planning permission for a unique home – once the design of the property is sympathetic to the particularly barren and windswept location on which it would sit.

Luke Spencer, of Spencer Auctioneers in Oughterard, also suggested that buyers may need access to a helicopter as the regular sea crossings from the small coastal village of Claddaghduff would not likely be for the fainthearted.

Alongside the monastic ruins, the island also has an intact stone beehive hut, an old miner’s cottage, a functioning septic tank and two fresh water lakes.

The Office of Public Works (OPW) has a significant interest in High Island which includes the ruins of a 7th-century monastic settlement, that is a national monument under its guardianship.

It has attracted attention from archaeologists from all over the world who have established that there was a settlement there going back as far as 300BC although there is some evidence to suggest people may have first settled on the island 700 years earlier.

By the 7th century, High Island, which takes about an hour to cross on foot, was home to a relatively thriving community of hardy monks. But by the early part of the 19th century, the island was stripped of human life save for a handful of copper miners who dug their last in the 1820s.

Between 1969 and 1998 the island was owned by poet Richard Murphy and it inspired many of his works including, most notably, an anthology which shared its name.

While Murphy owned the island he was only an occasional visitor and, in Connemara: The Last Pool of Darkness by Tim Robinson, a story is told about how the poet had planned to spend more time there and even bought himself a traditional sailboat for his crossings and had the miner’s cottage partially roofed.

“After one spell of five days during which he saw the sun for 20 minutes he gave up spending more than a few hours there at a time,” Robinson wrote after declaring that he was “neither a hermit nor a saint”.

While High Island is up for grabs to all bidders, the State could decide to step in and buy it although, if historical precedents are anything to go by, it may not make any such moves in a sufficiently timely fashion to secure the property in the national interest.

In the mid-1980s, Murphy offered the island as a gift to the nation with the hope that it would be used exclusively as a wildlife sanctuary but, according to Robinson, the “State’s response to this was so laggardly that the gesture was withdrawn and eventually the island was sold to a trusted friend of Murphy in Feichin Mulkerrin”.

He has owned the island since then and has worked hard in a low key fashion at keeping it as a wildlife sanctuary.

Mr Spencer said he would be happy to take potential buyers to view the property but only if he could establish they had both a desire and the financial means to acquire the island “and not just interested in a day trip to a beautiful location”.