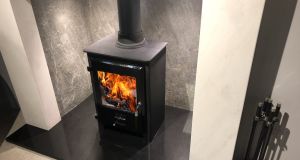 Coal, peat briquettes or turf shouldn’t be burned at all in a wood burning stove

With their sleek design and three times more heat (with less fuel) than open fires, wood burning stoves have become the touchstone for comfort and style in many traditional and modern homes across Ireland.

But with moves to bring tighter controls on the burning of all solid fuels announced by Minister for the Environment, Eamon Ryan in mid-February,  what you burn in your wood burning stove will now come under closer scrutiny.

The Environmental Protection Agency (EPA) has been highlighting the health dangers associated with the burning of solid fuels in our homes for some time. And study after study has linked the air pollutant, PM 2.5 (Particulate Matter 2.5 micrometres) emitted from smoky fuels to increased deaths from stroke, lung cancer and heart disease. These tiny particles can enter the lungs and the bloodstream and impact on other conditions including high blood pressure, diabetes, asthma and chronic obstructive pulmonary disease. International studies have even found higher incidence of Covid-19 in areas of high air pollution from smoky fuels and road traffic.

As part of its planned new countrywide ban on smoky fuels, the Government launched a public consultation (gov.ie/cleanair open until April 2nd) to encourage more discussion on how we can move away from smoky coal, peat, briquettes (whose production will end in 2024) and wet woods.

These new regulations which aim to improve air quality, will add to current laws on what you can and can’t burn in stoves.

For instance, it is currently illegal to burn materials with plastic components or plastic coatings (including magazines) which emit toxic pollutants in any solid fuel burner in your home. Apart from the impact on air quality and health, burning plastics can also damage the inside of your stove and chimney.

Burning treated or coated wood, chipboard, plywood or MDF is also ill-advised as these types of timber release toxic pollutants into the air inside and outside your house.

Coal, peat briquettes or turf shouldn’t be burned at all in a wood burning stove but many people burn so-called wet wood (also called green or unseasoned wood) in their stoves as it is widely sold in DIY, garden centres and fuel depots for that purpose.

Air pollution scientists are keen for wet wood to be included in the nationwide ban on smoky fuels because of the high levels of PM emitted.

“Many studies show higher PM emissions from wet wood than from dry wood,” explains Jurgita Ovadnevaite, senior lecturer at the School of Physics and lead researcher at the Centre for Climate and Air Pollution Studies at the National University Ireland Galway.

The problem with wet or unseasoned wood is that its high moisture content slows down the burning process, allowing more pollutants to be emitted.   Richard Nairn, ecologist and author of Wildwoods: the magic of Ireland’s native woodlands (Gill Books) cuts and seasons his own timber and stacks it on pallets in an open-fronted shed for use in his County Wicklow home.

“Hardwoods dry better than softwoods and ash, hazel and oak have a low moisture content so will burn slowly when properly seasoned for six to twelve months,” says Nairn. He suggests sustainably-sourced wood from Ireland is preferable from imported kiln-dried wood which has clocked up carbon emissions on its journey here.

While choosing well-seasoned wood for wood burning stoves is obviously the best option, scientists agree there is no such thing as smokeless burning and even the best fuels emit PM when burned thus contributing to indoor and outdoor air pollution.

“Burning should never be considered as the primary source of heat, especially in urban areas. Even supplementary use is quite bad as many people choose to [light their stoves] at the same time when temperatures drop which usually coincide with stagnant meteorological conditions resulting in extreme pollution events in populated areas,” says Dr Ovadnevaite.

However, newer stove models are expected to reduce emissions substantially. Under separate new EU Eco-Design regulations, it will be illegal to manufacture and sell new stoves from January 1st, 2022 that don’t comply with eco-design requirements.

As well as introducing limits to emissions of PMs as well as carbon dioxide, nitrogen oxide, carbon monoxide and organic gaseous compounds, these EU regulations will also require stoves to have a minimum energy efficiency of 75 per cent.

These new models are designed to increase the temperature at the top of the stove box which results in combustion particles being re-ignited before they leave the stove.

This eco-design feature also reduces the amount of seasoned logs required to produce the same amount of heat that older models of stoves give. The feature also means the stove will have to be opened less frequently for refueling thus reducing the levels of indoor air pollutants.

However, it’s a case of buyer beware as stoves manufactured before January 1st, 2022 will still be for sale until stocks run out.