Attractive four-bed in a quiet enclave has been tastefully upgraded 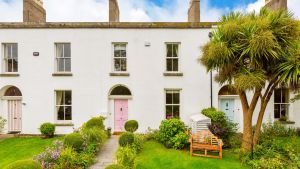 Why this Donnybrook enclave is not called Carlisle Square instead of Carlisle Avenue is lost in the mists of time – because it is a Victorian square with two-storey houses, some double fronted, some single, built in terraces on three sides of a good-sized, railed-in grassy square. The fourth side is to the rear of Marlborough Road.

It’s a cul-de-sac with just one entrance, and so isn’t a through road to anywhere or a place for random parking. Its combination of location, between Donnybrook and Ranelagh villages and its neat Victorian-era houses has meant that when properties on the avenue come up – which tends to be rarely – they often sell quickly for strong prices.

Now number 6 is for sale, and it’s the first time it will be going outside the same family’s hands in 70 years. The owner’s grandparents bought it in 1949 and she and her husband took ownership of the property in 2010.

As their own children came along – they now have three aged under seven – the couple improved and extended the house, replumbing, rewiring, and upgrading floors, doors and windows.

Eventually in 2016 they completed the largest job, extending at the rear to make the narrow galley kitchen into a more family friendly eat-in kitchen with access to the garden.

Extending to the rear of these houses is not the simplest of jobs – number 6 is mid-terrace with no rear entrance and the back garden is of the town-size variety, and it is a protected structure.

Now the bright kitchen dining space is fitted with a Noel Dempsey design painted timber kitchen with marble countertops and Neff appliances and there is underfloor heating. The island doubles as a breakfast bar. The work included adding a utility room and downstairs toilet.

There are two reception rooms; the grandest to the front with its sash window looking on to the square, has an original marble fireplace and the floor has been replaced, as in the hall, with parquet. The family room is to the rear.

Upstairs there are four bedrooms, the largest is en suite and the smallest is currently used as a home office. The attic has been floored and is used by the children as a playroom. Excluding the attic, the accommodation comes to 172sq m, 1,905 sq ft.

The front garden – the house presents very smartly with its white-painted render, and fanlight topped door – is mostly lawned with the path fringed by shrubs. The homeowners on Carlisle Avenue also own the railinged square out front providing more outdoor recreational space. Parking is on street.

Number 6, Carlisle Avenue, is for sale through DNG seeking €1.35 million.