Named after a music venue near Boston, Tanglewood is a great home for entertaining 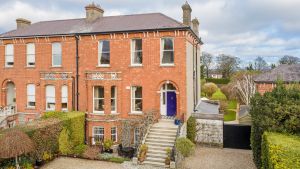 When Pat and Des Carney moved home from living in the US 36 years ago, they were attracted to Tanglewood by its name. “It’s a home of music near Boston and we love music,” says Pat. And seeing the huge drawingroom at the front of the house for the first time, they were amazed when “we looked up at the ceiling with its stunning plasterwork”.

The very large garden of Tanglewood, built around 1860, was another feature that attracted the Carneys. The couple reared five children here and there’s still a football net at the end of the 272ft-long back garden. It was a great house for entertaining too, says Pat, and was used for a wedding reception, which was held in the drawingroom.

The 390sq m (4,200sq ft) semi-detached Victorian stands on a generous site of over half an acre on Silchester Road in Glenageary, Co Dublin. It is for sale through Lisney seeking €2.5 million.

A virtual tour of the house shows granite steps leading up through a black-and-white tiled porch and opening into a red-carpeted L-shaped front hall which has elaborate cornicing and two centre roses. The richly furnished drawingroom at the front of the house has two tall windows, one a large bay, and a white marble fireplace. The interconnecting sittingroom and diningroom at the back of the house both have tall double-glazed uPVC sash windows and black marble fireplaces.

Stairs at the end of the hall lead down to the tile-floored garden level. The kitchen at the front, installed about four or five years ago, is large and modern; it has a bay window with built-in seating, Silestone countertops and a four-door Aga set into a black-tiled chimneybreast. There’s a family room and two bedrooms (one a study) at the back of the house. A smart downstairs shower room was installed last June and there’s a pantry and utility room off the hall.

Upstairs on the first floor are four bedrooms, one set out as a study/office, as well as a bathroom and separate shower room. Some of the rooms have attractive period features – marble fireplaces, sash windows – but there is scope to modernise, given the fashion for bedroom en suites.

The very long, very private back garden has a patio and high hedges, trees and shrubs bordering a lawn kept in shape by Des, for whom “mowing is great exercise”, says Pat. She also has little doubt that new owners might well extend the house at the rear as so many Victorian homeowners have done in the past two decades.

The sheer size of the garden points to the possibility of development, but that seems unlikely unless Tanglewood’s semi-detached neighbour was also interested in such a venture. (Chester Downs, a small development of five houses, was built in the gardens of numbers 31, 32 and 33 Silchester Road around the late 1990s.) There is plenty of room to park in the front garden.

The house is roughly halfway between Adelaide Road and Glenageary Road Lower on Silchester. It is also four or five houses up from Lord’s Walk, a pedestrian path leading from Silchester Road to the Metals, a walkway linking Dún Laoghaire and Dalkey.