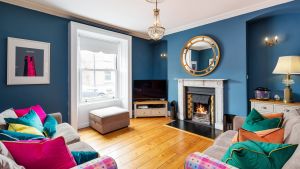 Emma O’Leary’s followers on Instagram, where she posts under the name @lifewithtinyhumans, have seen the best and the worst of her home at 3 Palmerston Place in Broadstone, on the fringes of Phibsboro in Dublin 7.

The “before” pictures of the two-storey-over-basement Victorian terrace, which she and husband, Michael, bought in 2014, feature a not-for-the-fainthearted period property in need of considerable work; the “after” pictures show a stylish and comfortable renovated family home, painted in rich colours with original features restored and with a smart bathroom and kitchen where every detail has been thought through.

The couple had been living in Drumcondra when they bought this, their first house, knowing they wanted a project and a walk-everywhere city property. Emma is a clinical speech and language therapist, Michael works in IT, and both worked nearby. In the many months between going sale agreed and getting the keys, they went from a young couple to expectant parents; now, nearly six years later, they are moving on with three boys aged under five – the tiny humans of her Instagram postings.

The potential offered by the basement was a major plus when they bought, says Emma. It was unused and boarded up, with the kitchen located in the hall floor return, “but it meant we could get extra living space without extending,” she says. Indeed, her “before” shots show the process of digging out the basement, tanking it and insulating.

It now comprises two rooms – the eat-in kitchen to the front and a family room to the rear. There is also access to this level from a flight of steps outside – stencilled by Emma and handy access, she says, for bringing shopping directly down to the kitchen.

At hall level there’s the fine reception room to the front, and the first of the three bedrooms to the rear. The return is fitted out as a play area leading into the utility room.

Upstairs, the newly finished bathroom is in the return while the first floor has been returned to its original two-room configuration. When they bought, that front room, with the fine original fireplace and which spans the width of the house, had been divided into two. They knocked it through to create their own large bedroom with two sash windows looking down on the street, and last year commissioned built-in wardrobes from a carpenter, who also made the bunk beds for the boys in the rear room on this floor as well as cupboards in the basement.

The young couple did the work in stages over the years – as their budget allowed – and Emma says that it made them appreciate each room all the more as it was done.

She is from Co Clare and the family are making the move out of the city to her home county; Michael can work remotely, she will be opening up a practice and they will be closer to family. And she’ll be documenting it all on her lively Instagram account.