Returning from London, Ruth McGahey laid the groundwork for a new interiors website while doing up her Co Meath home 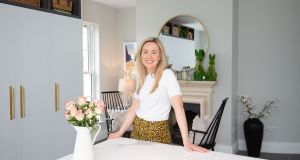 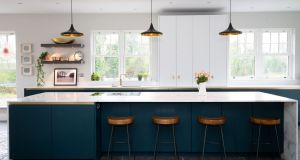 The kitchen has lots of prep space and under-counter storage, while the sink and a wall of low cabinets runs parallel to optimise the work triangle. Photograph: Tom Honan 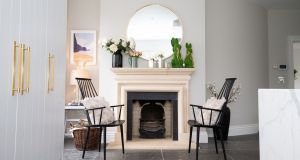 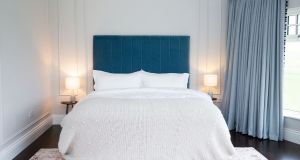 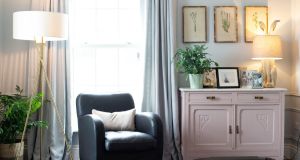 The old dresser is one of Ruth McGahey’s favourite pieces, which she painted pink. Photograph: Tom Honan 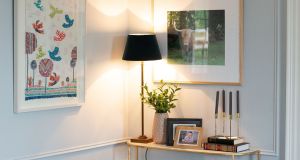 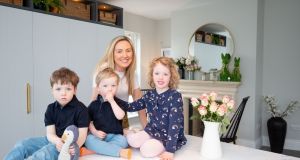 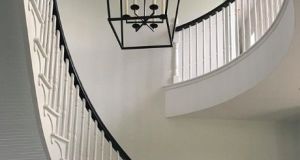 “My good friend Róisín used to walk by this house on her way to work every day and when I mentioned we were thinking about packing in London life, she sent us a few snaps on WhatsApp with the caption, ‘I’ve found your dream home’. We flew home on a Thursday to see it, put a bid in on Friday and, just like that, we’d bought a gaff in Co Meath,” says Ruth McGahey of the quickest decision she and her husband ever made.

McGahey and her husband, Andrew, had been living and working in London for a decade. McGahey was an interior architect for Weldon Walshe Architects in Belgravia, while Andrew worked as a solicitor in a city firm. The arrival of two children, Edith, now six, and Laurence, now four, was the impetus “to put our lovely four-bed Victorian terrace in Balham on the market and take our babies home to be near a support system. We were super lucky as we sold just before the Brexit fiasco started, just in the nick of time,” says McGahey.

Their newly acquired four-bed, 5,000sq ft house in Bective was only a year old but the decor and finishes didn’t reflect the couple’s personal style and they wanted to reconfigure some of the rooms and internal walls so the house would have a better flow.

With another baby (Henry, now two) on the way, McGahey felt she couldn’t take on the project alone so commissioned renovation firm Renova to oversee all of the work. That turned out to be a prudent move.

“Andrew and I had renovated our London home ourselves, plus I do this for a living, so I know how many elements of a project can go wrong, and the knock-on delays with materials or trades can have on the budget, not to mention your sanity.

“So, while it was an expensive outlay at the start to hire a renovation firm, it actually saved us money in the long run as everything – from installing new windows, to hiring a tiler – is their responsibility and all of the various trades and labour falls under one contract. It saved multiple headaches and meant we didn’t have to live with my parents for longer than planned.”

I told David [Dempsey] this kitchen has to contend with daily attacks from tractors, trains, slime and glitter, so it needs to be super durable, super functional and still look cool and he just got it

McGahey worked closely with the Renova team and, given her background, took the design lead on the project. The biggest undertaking was to redesign the kitchen. “We had this massive room but a really small amount of storage and work space. I armed myself with mood boards and material samples and headed to Noel Dempsey’s kitchen showroom. I told David [Dempsey] this kitchen has to contend with daily attacks from tractors, trains, slime and glitter, so it needs to be super durable, super functional and still look cool and he just got it.”

Collectively they designed a wide island, wrapped in book-matched Carrera marble from Millers Stone, with lots of prep space and under-counter storage, while the sink and a wall of low cabinets runs parallel to optimise the work triangle.

The space between the two main windows at the gable wall of the room was given over to a full-height fridge and freezer and larder tucked neatly behind a wall of tongue-and-groove cream panelled doors.

“We painted all the cabinets in Calm Interlude by Colourtrend and Loft White by Little Green Paints, and kept the lower units handless, but opted for the ping of brass on the tall units with Buster and Punch handles. I lost the plot a bit with the tap as it’s a Quooker, and at the time they didn’t have a brass finish, so I sent it over to the UK to be plated – of course now they have brass as a standard finish.

“I did make much more practical decisions too – like going for tumbled limestone floor, which hides dirt like you wouldn’t believe!”

The double-height hallway, which boasts a sweeping staircase, was transformed with the clever use of paint and the replacing of the pink marble floor with a dark chocolate hued parquet wooden floor from Wogans of Drogheda.

“I painted the pine bannisters, handrail and steps a glossy black and everywhere else white but then it was looking a bit too monochrome, so the back of the hall door was prettied up with a lick of Farrow & Ball’s Pink Ground to break it up.”

And so started her “thing with Millennial pink”. There’s a nod to it in almost every room in the house, from the bathrooms to the hall, the study and the living room.

“One of my favourite pieces is an old dresser I spotted in Kilkenny Architectural Salvage, which was brown with this nice marble top. I painted it pink and people are always asking where I got it from. That piece and my pink Hettie the Hare lamps from Graham & Green get all the attention.”

While all this refurbishment was going on, McGahey’s friends, who call her by the nickname Goose, kept urging her to start a blog on the design process.

“I laughed at the idea at first but then one Monday afternoon I was a bit bored and started putting up a few pics of the progress on Instagram under the handle @houseofgoose and it’s really taken off.

“I haven’t gone back to work yet and I’m at home with the kids all day. I actually find Insta a much needed creative outlet and a great way to stay connected to the design world.”

McGahey points out that social media has a reputation for being a negative and toxic environment, but in her experience she has found following and posting on interiors accounts buck this trend.

“I get so much positive feedback and great ideas from my followers, and from those I follow too, it actually boosts my mood – and I’m pretty honest on my Insta Stories and show the house when it looks like a tip and after the kids have destroyed it and people seem to love that frankness even more than perfect magazine-style posts.”

Spurred on by her success on Instagram, McGahey has dipped her toes into the blogging realm and has set up a website, House of Goose Studio, which she hopes will provide others with “Inspiration for designing, styling, and layering a family home and having a bit of craic along the way.”