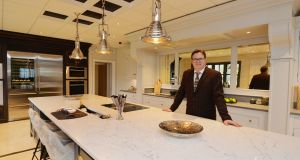 Family lore claims that Andrew Ryan was hammering nails into things from the time he could walk. A few years beyond the toddler stage he progressed to making furniture in the garden shed. In 1972, with his wife Elizabeth, he set up Andrew Ryan Traditional and Modern Furniture.

The Gorey-based business has evolved over the years. By the time Andrew’s sons Dominic and Aiden took over, in 2007, their father’s innovative skills and business accumen had built the firm a reputation for robust bespoke kitchens manufactured to the highest standards of craftsmanship, materials and design.

Dominic Ryan is now managing director of the business which, he explains, has moved far beyond its humble origins, with showrooms in Gorey, the United Kingdom and Monaco, and high-end clients throughout the world.

“When myself and Aiden took over the business it was just before the recession hit. There was a rapid decline in the market, so we really had to think outside the box to keep it all going. By 2009 we realised we had to export to survive. Everything is made here in Gorey, with a lot of the design done in the UK. We’re a small company, but we now have clients in Sweden, Switzerland, Germany, France, the UK, the Caribbean, Ukraine and Lithuania.

In Ireland, the Ryans are best known for the work they do in mid- to high-end kitchens which marry tradition with innovation.

“We have old-school traditional ways of doing things, so we still employ gilders and hand-painters, and it’s all solid wood dove-tailed drawers, for example. One of the original men Dad hired, recently deceased Henry Doyle, was a trained carriage builder who had done a long apprenticeship. We have a lot of staff who are more than 30 years in company. So really talented and highly trained. We’re also very advanced in terms of manufacturing, so we’d have quite a serious capacity.”

The Ryan brothers’ showroom in Gorey shows the various finishes they can do. While Aiden runs the manufacturing and the floor end of things, Dominic spends most of his time with clients taking briefs and running projects.

“I tend to deal with the high-end projects. Aiden’s job is to deliver on my promises!” says Dominic.

“I meet our customers and take a brief. I try to get insight into how they live their life, where they’re comfortable in terms of spend. We try to get the functional aspects working first. At the end of the day the kitchen is an important tool in your house, so if you’re tripping over the dishwasher while you’re putting your pots away it’s not working. You want to make things accessible, easy to clean. The challenge is to try to optimise functionality with aesthetics.”

One particularly innovative aspect to the Gorey manufacturing base is the on-site builds that come as part of the service.

“We dry-fit everything first. So we actually build it here and our clients get to see it and we can tweak it before it goes out to them. At the moment, in our factory, on one side we have an uber-contemporary kitchen that’s black with bronze fittings and very slick. Then on the other side of the factory we’ve got something that’s more classic-contemporary with a traditional twist to it.”

They are also happy to take on unusual commissions such as the rather secretive job they’ve just finished, a challenging project on a private island that won’t be unveiled to the public until later this year.

“Also recently, we rebuilt a study based on drawings done around 1786, with hand carvings of lions’ heads and all sorts going on. You wouldn’t do an awful lot of stuff like that, but we develop a close relationship with people and they trust us. A huge percentage of our work is repeat business, like someone coming in to us as the children of parents who used us 20 years earlier. That sort of support kept us going during the darker times of the recession.”

While the home-generated commissions have always been crucial, Ryan says the international aspects of the business have allowed them to bring innovative, far-reaching designs home. Some of their most popular kitchen ranges have overseas influences.

“When we opened in France we spent a lot of time in Nice. I loved the doors in old Nice, which led us to develop the Monaco Range. Our Bruges Range is based on more Belgian influences. There’s quite a strong take-up on those lines for us in Ireland. What we set out to do is to try to differentiate ourselves from a design point of view, and also to stock a lot of the really high-end appliances that aren’t so readily available nationwide such as the likes of Sub Zero, Wolf and Gaggenau.

Dominic and Aiden aren’t the only family members in the business, with Dominic’s wife Siobhán looking after the marketing, PR and HR end of things. The husband and wife team spend a lot of their days talking about other people’s kitchens, but on the home front Dominic admits to having “sort of railroaded” things when it comes to their own kitchen.

“It’s a complete concept kitchen. I went off and experimented, which Siobhán probably wouldn’t want me to repeat again. We have very unusual mouldings and carvings and all sorts of things. I’m about to re-do the kitchen though, and my wife is definitely being fully consulted this time!”