The colourful world of Om Diva 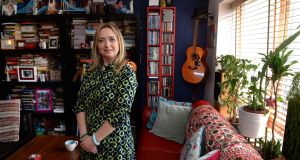 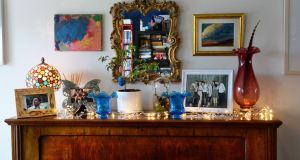 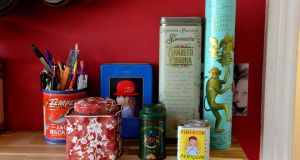 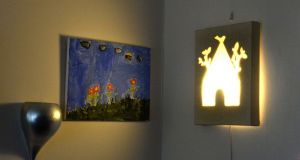 Artwork on the walls of Ní Loinsigh’s home

Ni Loinsigh is a Dubliner who spent six years after college backpacking around Europe, Australia and Israel, and making jewellery. She returned home in 1998 and is now the owner of one of Dublin’s brightest and funkiest boutiques, Om Diva.

She began her retail career with a market stall in Blackrock Market and Mother Redcaps, selling Indian crafts, and later started manufacturing dresses in India and selling them in the Market Arcade in Dublin.

Her Drury Street shop, Om Diva, opened in 2005, with three Irish designers. It now houses 38 designers over three floors, and continues to grow. She is married to Cois Ceim dancer and photographer Jonathan Mitchell and they live in Finglas with their two daughters.

It is primarily colourful, because colour is life and my style is inherently colourful and in no way contrived. The whole house is open plan, so the kitchen opens into the eating area, which in turn opens into the living area. I have a walnut floor which is really warm, lends itself to colour and runs the whole length of the house. It was our biggest investment 10 years ago – and I think it is worth spending on a good floor. Because I always gravitate to texture and colour, I just add what appeals to me.

Which room do you most enjoy?

Probably the kitchen, which is at the front of the house. I am first up in the morning and we get milk delivered, so I make a pot of coffee and look out at what kind of day it is and the trees and the birds. At that time of day, it is so quiet and peaceful.

What items do you love most and why?

A big piece by the Dublin-based Israeli artist Daniel Lipstein who I met when he was selling roses to finance his fine art degree in NCAD. His print of his family is mind blowing. It hangs in front of the dining table.

When I started my business, I would import anything that I liked. I fell in love with the Bastar tribal art of India and imported loads of it, pre-recession, and kept two wrought iron candleholders.

I also love my mother’s piano, which she bought at 16 having saved up for it – though I don’t play – and my grandfather’s Singer sewing machine. I come from a family of tailors, who founded Lynchs menswear shop in Camden Street.

Who is your favourite designer?

I find it difficult to choose as I see so much quality from young Irish designers. It used to be Vivienne Westwood, but I have expanded from there and my taste is broader. I love what Sarah Burton is doing at Alexander McQueen, and carrying on his legacy so well. I love Dries Van Noten’s clean lines and the colours he uses and I love Tissue, started by two young Irish designers.

Which artists do you most admire?

Having seen the Lucian Freud exhibition at IMMA, I was overwhelmed by the scope that paint has to convey human emotion. His use of paint, the layering, the brushstrokes and then the fine detail of the etchings ... He thought of paint the same way as flesh and you can see how he liked Irish faces, which are so expressive, as in the painting Head of an Irishman.

What is your biggest interior turnoff?

I love the balance of form and function – I love old tins which I use for kitchen utensils and paintbrushes – but if you choose only function or just form, it is difficult to allow personality to creep in. It is important to allow your own personal style because at the end of the day your living space is an extension of you.

Which travel destination stands out?

I have travelled extensively throughout India and I love it. It is as difficult as it can be. Public transport is difficult. As a woman on your own, it is difficult. But going there is the most colourful, vibrant and visceral experience that you can ever have.

I couldn’t spend that amount on any one thing, but what I would do is build a lovely extension with a lot of light because the kids are getting bigger and the house is getting smaller and I would have more space for my tins.