Steal the style of these inspiring getaways

Best in Class: Leave the bathrobes and shampoo behind and take interior ideas instead 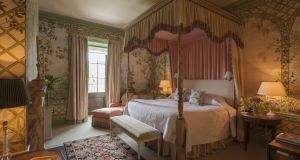 If you fancy making changes to your home’s décor then what better way to experiment with new trends, textures and colours than by immersing yourself in a three-dimensional, experiential stay where you can live with the look for a short period before you make any expensive investment.

Steep yourself in stately style at Ballyfin Demense in Co Laois, designed by Sir Richard Morrison and his son William Vitruvius for the Coote family. This is where decorators go to relax and drink in its rarified atmosphere, from its inlaid floors, designed by Morel and Seddon, a firm that also did the floor of the green drawing room at Buckingham Palace, to the saloon’s gilded mirrors by Thomas Chippendale where from its plumply upholstered seating you can admire the green scagliola columns and ornamental coved ceiling. You sleep on Vispring beds, between sheets by Revolta Carmignani and can even entertain the idea of whether a hall of mirrors look in your bathroom is something you want every day of the year. The property can be booked through Ireland’s Blue Book and costs from €990 on a full board basis for one weekend night for two people.

Its role call of guests includes designers Michael Smith and William Yeoward, as well as celebrities George and Amal Clooney and Kim Kardashian and Kanye West, who have also spent time here.

Sample Asian fusion at Candlewick Cottage, outside Donegal town, a bolt-hole that was bought by Kildare man Damian Mc Manamon and his Tyrone-born wife Breda, who met in an Irish bar in Hong Kong and got married at Lough Eske Castle. They fell for the location and have spent most of the last decade transforming it into a textural haven. Damian, a professional chef, hired Wilson’s Yard to install the kitchen to his specifications while Breda, who moved to Hong Kong to set up Marks and Spencer’s office there, bought many of the furnishings in Asia, including fabrics from Sri Lanka, a slate blue lacquered dining table, custom made for the property in Hong Kong and a round cedar Japanese bath with ladder to climb into it and a seat inside so you can immerse yourself in it and an overhead shower ring by Burlington. It sleeps up to 10 people in 5 rooms and costs €995 for a weekend in November through Unique Irish Homes. uniqueirishhomes.ie

Sample surf shack style in Co Mayo. If activities are more your thing then consider a trip west to BigStyle Atlantic Lodge, in the townland of Killadoon, set up on the hills above Carrownisky Beach, on the south shores of Clew Bay in Co Mayo. The views are spectacular with Croagh Patrick to the right, Clare Island and Inishturk to the left. Situated about a 35-minute drive south from Westport, on the site of Ocean Lodge Hotel the property, which is run graphic designer Ben McDonald and kite-surfer Kris Goodbody, the latter started teaching kite surfing out of the back of his van, teaching out of Poolbeg and also offers paddle boarding in Dun Laoghaire harbour. The lodge has 14 en-suite bedrooms and two four-bed dorms and in winter can take groups of up to 20 people.

The accommodation is in the hotel buildings where the pub and yoga room are on the ground floor but it is the back lodge look that is most inspiring. McDonald’s design riffs on the surf shack and includes decorative rope work that he bought in a marine supplies shop in Howth with the lads pulling in favours from friends to complete the refurb. It is first and foremost a watersports company but yoga is very much becoming an integral part of the offer. For November and December the emphasis is on hiking and yoga, with the option of watersports, weather-permitting. Dorm accommodation costs €230pp while a twin room with Ensuite is €260 pp sharing for a two-night, all-inclusive stay that includes accommodation, breakfast, lunch and dinner and activities, from Friday to Sunday, Friday November 15th to Sunday, 17th; 29th of November to the 1st of December and December 6th to 8th. bigstyle.ie

Try toasty coastalism at the cosy cabin at Dunbrody Country House, Co Wexford, which sleeps four, two in a double bed and two in the other single rooms, and is about a three-minute walk from the dining room. It launched last year and its timber construction with painted clapboard panelling and painted floors channels east coast America aesthetic and allows you to live with this style of coastal chic to see if you might like to try it at home. When the rain comes you can hear it beating down on the roof, safe in the knowledge that all the creature comforts of the fine dining establishment are nearby – save for phone and wifi signals. It is the perfect place to try a short-term digital detox. Prices start from €165 per night, on a room only basis. Dinner is an additional €65 per head or you can dine more casually in the seafood bar or at The Local, a pub on the grounds, open Thursday to Sunday only at this time of the year. Breakfast is from €15 for a continental or €20 for a mini Irish. It would really suit a get-away with the girls or a mini vacation with the family - kids can order half size portions. There is a spa onsite that uses Aromatherapy London products and treatments have to be booked in advance. dunbrodyhouse.com

Model modernism in West Cork where Skyros is nestled at the foothills of Mount Gabriel above Schull. The modern architectural gem is designed by architect Niall McLaughlin. Its sleek lines and floor to ceiling glazing frames snapshots of Roaringwater Bay and the Mizen Head coastline. Clad entirely in Kilkenny limestone, the poured concrete residence marries modern comforts like underfloor heating and a glowing double-sided fire as well as the farmhouse heat of an Aga. The property can sleep two, four or six, in its double, one twin and one single room and costs from €1,336 available for short break or week stay from €1,742 through Unique Home Stays. uniquehomestays.com

Channel contemporary cottage cool in Co Kerry. The traditional Irish cottage is a thing of beauty but many of our experiences in them have been marred by a sense of damp and darkness. Not so in the Lost Cottage, a love nest built for two that marries the original charm of the traditional longhouse with the sleek lines and large picture windows of its contemporary extension designed by Maxime Laroussi of award-winning architectural practice Urban Agency. Cabinet maker Terence Murphy of Goodform Ashtonville, who also did the fit-out of Bagots Hutton, and owner Brian Spain, who runs Emilie’s bakery and artisan pizzeria in nearby Glenbeigh, decamped for the winter to get the job done.

“I was brawn and he was talent,” says Spain. Murphy handmade almost everything from the windows to the sofas and he got specialists to do the lime. The property has an air to water heat recovery ventilation system so there is no build-up of mould no matter what sort of cats and dogs are coming down outside and there is underfloor heating in the new building so you can pad around in your stockinged feet. Spain has opened Irish pubs in Madrid, London, Paris and London and still has one in Biarriatz, called The Coolín. The property costs about €1156 for a weekend stay for two through Unique Home Stays. uniquehomestays.com.

Sample strong colours in Co Down in Tullymurray House, a historic country farmhouse that is situated about half way between Newry and Banbridge and set on gorgeous gardens that include an orchard. Available to rent through The Irish Landmark Trust you can experiment with strong colours on the walls and an agricultural red on the painted kitchen units where traditional chairs painted a spearmint green have been set around an oilcloth-covered table all warmed by a traditional range cooker. The property also boasts a wellness centre where you can test its hot tub and sauna before committing to such luxuries at home. The residence can sleep up to eight people and has a two-night minimum stay policy. A two-night weekend stay for eight people in November will cost from €726. irishlandmark.com

Experiment with eclecticism in Connemara where Streamsend, in Moyard between Clifden and Letterfrack in Co Galway, has all the eclectic handwriting of fashion, product and interior designer Roz Walsh, the former creative director of Avoca, who made the property feel more country for its owner. She painted out the kitchen, changed the handles and numbered all the cupboards so people can find the ketchup, she explains. She also spent about six months going to markets in England and France looking for interesting objects like the toys on the floor of the games room. The wire light fixtures by Vox Populi feature mise en scene, and include the chandelier over dining table. The property is only available on a week long basis, sleeps eight and costs €2,000 from Unique Irish Stays where you can also book at getaway at Walsh’s own home in Co Wicklow. The two-bedroom property costs €590 to sleep four for a winter weekend. uniquehomestays.com

The Moxy Hotel is part of the Marriott Group and has delivered cool design statements to cities like New York. It has just opened its first establishment in Dublin, on Sackville Place, to the rear of where Clery’s department store once stood on O’Connell Street. The 158-room building has a funky look that has been executed by MCA Architects who refurbished the 1970s office block, adding three floors and designing within a specific theme. Moxy Dublin offers foosball tables in the lobby, democratically large communal tables to sit at for coffee, neon lighting, graffiti as well as luxurious rain showers and furiously fast wifi. The furniture was supplied by Sheelin Office Furniture Bushell Interiors, andyou can swing out in the latter’s woven hanging egg chairs, priced from €700 each.  Supplied in black and grey but they come in some primary colours as well as neutrals. The raw steel Tolix bar stools, about €300 each, are worth noting as are the dining tables by Andreu World, a Spanish brand, from about €400 each from Bushell. The custom street art is by ADW and there are smart chairs in the bedrooms by MJ Flood. Rates from €149 per night.