Turnkey Blackrock home has thought of everything for €1.15m 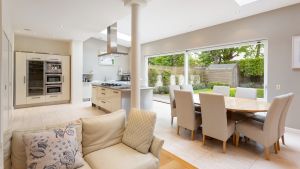 Number 8 Frascati Park is located along George’s Avenue in Blackrock and just around the corner from what is known as Frascati Park proper.

The exterior photograph of a neat organised garden and well maintained facade is an indication of the condition of the interior, which would not look out of place in a showhouse.

Despite most of the renovations being undertaken by previous owners in 2006, every inch of this 170sq m (1,830sq ft) house is in turnkey condition so much so that it still feels brand new.

Inside the property, which dates from the 1930s, it is all a very neutral affair, with travertine and pale oak flooring downstairs, buff velvet carpeting on the upper floor, and warm biscuit tones on walls and furnishings.

The large open plan kitchen-dining-living area adds wow factor and opens to the rear garden through an entire wall of sliding glass doors.

The appliances, which include a bean-to-cup coffee maker and Liebherr fridge, are integrated, and the installation of a large painting on the wall in the kitchen where most houses would have upper cabinets, creates a lovely backdrop overlooking the central island.

The absence of a utility room is compensated by two large seamless storage units which hide the machines, water tank and drying press, and you would barely know they are there.

The living space of the open plan area houses a fireplace, as does the separate living room to the front of the house. These two areas can merge into one huge open plan space for entertaining, by opening the concertina doors between the two rooms.

At ground level there is a small study where a large drawer sits seamlessly into the base of the wall. In a clever move, all the television, sound and internet accoutrements that usually crowd a room with endless leads and plugs have been given a home out of sight and certainly out of mind.

Further storage can be found in two units under the staircase, one of which is so spacious it works as a cloakroom and houses a full sized filing cabinet, and there is a further 18 sq m (200 sq ft) of storage in the attic.

As you would expect the back garden is low maintenance and well organised. Laurel and box form neat hedging that defines the edges of the lawn and a sunken paved dining area, overlooked by walls of bamboo and some lovely old trees from a neighbouring garden.

Sherry FitzGerald is seeking €1.15 million for the property which is just a stroll from Blackrock village and Dart station.