Shelfies with Irish writers: how the literati keep their libraries in order 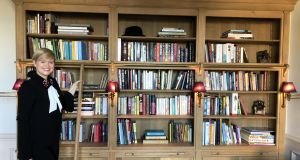 Cecelia Ahern fantasises about “a surreal magical room, where I could call a book and it would fly off the shelves and land in my hand, like in ‘Matilda’”.

Would I sound crazy if I admitted to knowing that I have 16,344cm of shelving in my house, of which 10,322cm are filled, leaving me room for about 3,000 more books before I have to build an extension? Perhaps, but I would suggest that people who don’t know their shelf statistics are the crazy ones.

I’ve been a reader, writer and book collector since I was a child and, as I’m organised to the point of OCD, I have an incredibly simple system in place for my library. Irish writers can be found in the living room while their British counterparts are next door in my office. The Americans, Canadians and Antipodeans each have a room upstairs where, above the staircase, live the books in translation. Throughout, authors are shelved alphabetically, and, within that, their books run in chronological order. I mean seriously, what could be simpler?

Recently I visited the homes of five writer friends to discover whether they were similarly obsessive and found myself wanting to take charge of some collections while offering cautious approval to others. Three – Rob Doyle, Sebastian Barry and Claire Kilroy – used the word “chaos” to describe their libraries while only two, Cecelia Ahern and Anne Griffin, came close to meeting my exacting standards.

“My life is fairly transient, so my library is scattered on the four winds,” Rob Doyle, author of Here Are the Young Men, told me. “I have some in my parents’ home, some in Rosslare, some in Berlin. I’m living in Kimmage at the moment and the books I keep there are the ones that are most current to me.”

The new Laureate for Irish Fiction, Sebastian Barry, in deep competition with Doyle for the title of tallest and most handsome Irish writer, delights in the old bookcases that line the walls of his Wicklow home. “The chaos is in a beautiful place that gives me solace,” he said. “When I was a child, I dreamed of standing outside a window, looking in at a roomful of books. And that’s what I have. There are books hiding behind books and when you’re looking for something, you rediscover something else.”

Having moved home five times, Claire Kilroy says her books “got thrown in the air and fell down in random order. I used to be very organised as a single woman, but I’ve lost all control of my life since motherhood and wifehood and I don’t try anymore. I’m too busy controlling the toys.”

Thank heavens, then, for Cecelia Ahern, who restored my faith in humanity with the well-ordered shelves in her Malahide home. Ahern fantasises about “a surreal magical room, where I could call a book and it would fly off the shelves and land in my hand, like in Matilda”.

Anne Griffin, whose debut novel, When All Is Said, will be published early next year by Sceptre, recalls Rex Harrison’s library in My Fair Lady, floor-to-ceiling books, a winding staircase, a ladder, and longs for one of those. Having secured UK and US deals, along with a plethora of foreign-language publishers, she might need one soon. Griffin won bonus points for alphabetising her fiction by author, leading to a debate between her and her son Adam on where Louis de Bernières belonged, under D or B. (The correct answer, of course, is D. You wouldn’t put Joseph O’Connor under C, would you? Unless you were a lunatic.)

The issue of culling is one that makes bibliophiles nervous. While Ahern gives unwanted books to charities and schools, Barry keeps everything, because “there’s something about them being the leaves of some other summer, even though they’ll never be opened again. Withered leaves that represent time passing and a record of an imagined life.”

Doyle too gives most of his discarded titles to charity, “but in extreme cases, if a book is so egregiously bad that it would be unethical to let people read it, I will throw it on the fire and destroy it”.

Kilroy says her attitude, since she was a child, has been about trying to get rid of stuff. “I like to keep the signed ones, and the books I think of as friends, the ones that have travelled with me. We bought Billy bookcases from Ikea and have brought them with us on every move and our books have made each new place a home.”

We all have a particular edition that holds a special place in our hearts. For me, it’s a signed and dedicated copy of A Widow for One Year by my friend, John Irving, who has been something of a mentor to me over the years. Kilroy treasures her grandfather’s edition of Ulysses, “even though all the pages have fallen out and they’re in the wrong order”, which makes it sound a little like Finnegans Wake. Doyle holds tight to a collection of Yeats’s poetry with an inscription from an ex-girlfriend, while Ahern loves a copy of The Atlas of the Irish Revolution, given to her by her mother, Miriam, with a personal letter inside.

And then there are books that represent particular achievements. For Anne Griffin, it’s a copy of John McGahern’s By the Lake, given to her as a gift when she won last year’s McGahern Award, while for Barry, it’s the extraordinary one-off editions of A Long Long Way and The Secret Scripture, presented to him to mark his Booker Prize shortlistings.

Of course, the true test of any library is how quickly one can find a book within it. I chose a random title in each house and tested the writers. Rob Doyle won hands down and I’ve now taken to calling him ‘Three-Second-Rob’, a nickname which, for some reason, he doesn’t seem keen on me popularising.

But for all that our libraries mean to us, and the pride we take in our collections, they also serve one final purpose for writers: a place to keep our own work. And it’s Kilroy who offers the best reason for lining up her novels where her five-year-old son Lawrence can see them.

“I want him to know,” she told me, “that Mammy doesn’t just clean things.”