What sold for €800k or less in Dublin, Wicklow and Cork? 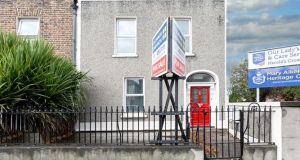 Six-bedroom end-of-terrace house with deck, garage and garden to the rear. The 193 sq m (2,077 sq ft) has numerous ensuites.

Terraced three-bedroom house that has been completely refurbished in the last three years and comes with a good sized back garden.

Housing crisis: What the rest of the world can teach Ireland
6

Ross O’Carroll-Kelly: ‘Críost on a rothar. It looks like Chorlie Haughey’
8