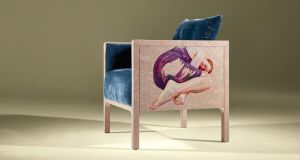 Portuguese gastronomy is cooking, its cities top travel lists and its decorative innovation is unparalleled with many of its top names residing in the country’s second city, Porto. One name to know is interior designer Luisa Peixoto who sells several ranges of contemporary furniture in addition to her décor work. In these she has collaborated with numerous artists to create artworks that also function. In her work with painter Christina Toufa for the limited edition Na Box occasion chairs she is tapping into the trompe-l’oeil trending in upscale homes. luisapeixotodesign.com

Plates are the new way to make walls and niches artful. La P’tite Trenchie, a vintage shop in the small town of La Cannet, a leisurely 15-minute walk north of Cannes is a directional little retailer with a lifestyle blog of the same name. This image, shot in the shop, features a selection of hand-painted porcelain plates by Bea Yato, a self-trained artist whose background in history of art shows in her confident combinations. They are fun, funky, even a little bit rock’n’roll. This is a trend where modern, antique and vintage can mix. You can set plates on shelving and surfaces using acrylic or wire frames. When hanging on the walls there is a range of adhesive discs you can buy online and in good hardware stores that adhere to the back of the plates to help them sit flush with the wall. And then when you have guests round you can take them off the wall and use them. Yato.fr

3. The designer name to drop

Mistress of modern minimalism Cecile Manz’s style is uncompromising craftsmanship done Danish style, so it gives the appearance of simplicity while using the best of materials. Mantz has been selected by Maison as its Designer of the Year and at first glance this two-tone linen canvas pouf seems underwhelming but a second gaze will pick its delicious details including the leather piping that trims its circumference. It is perfect as an additional place to perch or to elevate stocking feet but only at the end of the day. She designed the piece for Fritz Hansen’s Objects collection and it is available to order from Dún Laoghaire-based Lost Weekend. Lostweekend.ie

Flooring is in the middle of a mini revolution. Homeowners want the practicality of wood and decorative tiles but, after a long time in the style wilderness, rugs are back in vogue with upscale designers showing off their talents by playing with scale, colour and form. The 1980s Memphis movement has been percolating down, inspiring many designs including CC Tapis, while Rug Society pays tribute to artists Paul Cezanne, Jackson Pollock and Picasso with its new collection, Fever. Pictured is Mira, a representation of Cleopatra in cubist language. Made of botanical silk and mohair, from €5,000 for a 200cm by 300cm rug. Rugsociety.eu

5. Everyone is talking texture

At the show, London-based Tom Dixon Studio’s new collection highlights the return of texture to soft furnishings. Its products cover hand tufting, embroidery and print - a combination not seen on any great scale since the 1970s. Several Italian-based firms have already shown wall hangings but Dixon opts for thick, woolly, substantial cushions, hand tufted in Varanasi, northern India. Made using New Zealand wool, backed with natural linen and generously filled with duck feathers they will be on all design editors’ wishlists. A second range, Boucle, in khaki and electric blue may appeal to those for whom the 1970s are just too recent to be reprising. Tomdixon.net

The obsession with creating a focal point in rooms continues. Many homes no longer have an open fire but the allure of the hearth is something that is deeply printed in our DNA and this ancestral allure is something that Portuguese-based GlammFire has tapped into by creating bioethanol fires that also function as beautiful pieces of furniture even when not in use. Urban, is a seductive-looking sideboard that when lit draws all eyes to it. Set on colt-like legs its firebase is made of ceramic-coated brushed stainless steel. Its exterior comes in fine textured metal in blue or black, lacquered steel or a rust-like corten-effect steel. Its front is made of high-temperature glass.

It does come with a caveat. The fire, which has a burn time of five hours, shouldn’t be lit in a space less than 29sq m in size. Prices start from about €8,000, ex delivery and VAT from either UK-based Bioethanolfires or Biofires, or from GlammFire directly. Glammfire.com; Bioethanolfires.co.uk; Biofires.com

The tech revolution continues although much of the development is rather low key. As a result of Samsung’s headline collaboration with the Bouroullec brothers on Frame, a slim-line screen that when off could function as a painting and become decorative, television screens are finally being considered as a piece of furniture. Dutch design firm Vogels specialises in contemporary wall brackets and pedestals to perch TVs on to help integrate them into the overall décor. Its Next OP1 is a collaboration with Danish product designer Matte Kidde, and lightens the feel of the gogglebox by placing it on a pale wood tripod stand. Vogels.com