Dramatic marriage of old and new in Sandymount Victorian for €1.495m 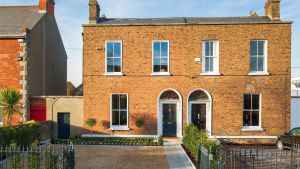 The foundations of Newbridge Avenue in Sandymount were constructed with stone which originally came from the Dodderbank Distillery, a 21-acre site and much of what Sandymount comprises today.

It was owned by the famous Haig family of distillers, the daughter of which married John Jameson, thereby fusing two of the world’s great distilling families. The Haigs were notorious for their run-ins with revenue and local lore has it that a number of customs and excise officers disappeared from the site never to be seen again. Forced to close by Revenue, ironically enough the distillery was then acquired by a former tax inspector, Aeneas Coffey, who ran the distillery until the 1840s when the site was purchased by a builder who developed housing along Newbridge Avenue.

Number 7, a fine Victorian family home was purchased by developer Diarmuid O’Sullivan in April 2017 for €1.265 million. O’Sullivan, through his company Carrickreagh Developments and architect Andrew Coulter, totally gutted, renovated and extended the property. It now measures 204sq m (2,195sq ft) from its original 164sq m (1,765sq ft), and is back on the market through Hunters with an asking price of €1.495 million.

Carrickreagh is currently developing the former Rosemount School in Blackrock which when complete will comprise nine houses and six apartments designed by Howley Hayes Architects.

The extension at 7 Newbridge Avenue allowed two double bedrooms upstairs giving the house four doubles in total, and a vast kitchen-cum-diningroom set in a glass block at ground level.

Because the new dining area was located in the extension, it allowed for two living rooms at hall level, both of which have new sash windows, working shutters and the old floors have a matt Guinness stain which works well with the décor by staging company Fitout Interiors.

The design is very clever: the installation of a glass connection between the old and new build floods the second reception room with light, and replacing the old window with a period-style door allows a great flow throughout the property.

The garden, designed by Outside Options, who took a gold medal at Bloom in 2017 and 2016, wraps around the extension and is a neat, low maintenance city space ideal for entertaining. The lighting at night combined with the looming Aviva Stadium mothership creates a dramatic backdrop. There is off-street parking to the front for three cars, which is a rarity on this road.

A further wow factor is the master bedroom which takes up the entire width of the house. It now has an en-suite and an open fire for cosy winter evenings.

The property’s BER rating has risen from an F to a much-improved B3.

“We really try to preserve the integrity of period buildings,” says O’Sullivan. This has been achieved successfully in a clever marriage between old and new, and with everything completed all new owners have need do is unpack and move in.