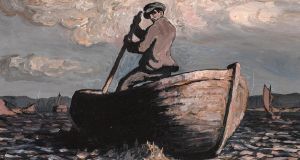 The week ahead is a busy one for fine art on the Irish auction circuit, with a dizzying number of superb paintings for sale.

On Monday, December 7th, 136 lots of exceptional Irish art will be offered for auction at Whyte’s “virtual sale” in Dublin, followed by de Vere’s and Adam’s of Blackrock on Tuesday, and Adam’s of St Stephen’s Green on Wednesday, December 9th.

The top lot featured in Whyte’s sale, which has a combined estimate of €3 million, is a luminous oil painting by Irish impressionist Walter Osborne. Entitled A Tale of the Sea, it depicts a group of young boys gathered on a pier at Walberswick.

The mid-1880s saw a substantial influx of young artists to the seaside town of Walberswick on the Suffolk coast. Mainly Paris-trained, many of these artists went on to be prominent painters, the best-known of whom include Philip Steer, Walter Osborne, Nathaniel Hill and Augustus Burke.

For equestrian lovers there is Sir William Orpen’s Sergeant Murphy and Things; Mr Stephen Sanford’s Sergeant Murphy with Captain “Tuppy” Bennett and The Trainer George Blackwell. The artist’s first – and highly-successful – foray into the genre of sporting art, it was due to be shown at the exhibition Irish Horse at the National Gallery this year, before the event was cancelled due to Covid-19 (lot 44, € 250,000-€ 350,000).

A trio of oils by Paul Henry also feature. Now considered to be one of the most influential Irish artists of the 20th century, ironically it was a poster that brought Henry’s career to fruition. In 1925, the London, Midland and Scottish (LMS) Railway Company reproduced one of his Connemara paintings on a publicity poster, and almost overnight the artist found international fame.

In the year that has been all about Jack B Yeats – since a record was set for Reverie at Whyte’s auction in November last year, when the hammer dropped at € 1.4 million – the sale includes two oils, with each showcasing the different styles in the artist’s oeuvre.

Also described as having a “distinctive Celtic atmosphere, in which peculiar mystic effects are produced”, the painting last appears to have sold in France in July this year through auction house Ivoire Bordeaux, when it achieved €115,000 against a € 30,000-€ 40,000 reserve. It was originally purchased by John Vanston, the lawyer and father of Irish Cubist painter Doreen or Dairine Vanston (1903-1988) when it was first exhibited in 1914.

Nicknamed the “civilised head hunter”, le Brocquy painted a host of cultural figures including Yeats, Beckett, Picasso and Joyce, saying he did so because they were famous but vulnerable and poignant.

In 2000 he became the fourth of a select group of British and Irish painters – alongside Francis Bacon, Lucian Freud and David Hockney – to see one of his works sell for more than £1 million during his lifetime.

No doubt it will be a nerve-wracking week for auctioneers, with four sales so close together. Then again it has been the kind of year few of us have witnessed before, and with the success at Irish auctions during the past 10 months while we all cocooned, anything is possible. See whytes.ie