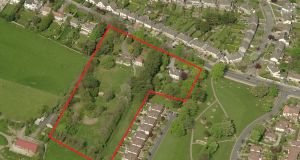 The Marlet Property Group has been given the green light from An Bord Pleanála to apply for planning permission under the fast-track planning system to more than double the number of units permitted at its Green Acres convent site on Dublin 14’s Upper Kilmacud Road.

Marlet previously obtained planning permission to build about 120 apartments on its site, which stood at 1.23 hectares (3.04 acres) at the time. Towards the end of last year, the developer acquired a nearby period home named Drumahill on 0.26 hectares (0.64 acres) for €2.1 million, according to the property price register. Unluckily for Marlet, the property was separated from its apartment site by a strip of land owned by Sorohan Builders, but Marlet has now mangaged to acquire that site for an undisclosed sum.

In all, Marlet’s enlarged site now spans some 1.76 hectares (4.35 acres). In February 2019, it consulted An Bord Pleanála as to whether it would be reasonable or not to apply for planning permission for 255 apartments on the site, which the planning authority has now approved, paving the way for an application. The site is near the Balally and Kilmacud Luas stops, in addition to the Dundrum Town Centre.

The apartments are specifically designed for the build-to-rent market and the proposed block would comprise a gym, concierge, lounge areas and roof terrace. According to recent reports, there is an estimated €7 billion of institutional capital chasing build-to-rent assets in Ireland.

Want to avoid the wonky first pancake? Here’s how ...
4