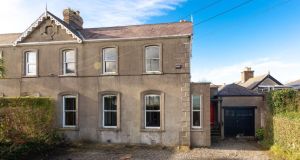 With the market off to its spring start and properties aplenty coming on stream, particularly at the higher end, it’s interesting to see a few brave souls plumping for the auction sale.

In days of yore – circa 2007 – you were nobody if your residence hadn’t been hammered down in a packed auction room. We all know what happened next, but a few recent sales would indicate there’s life in the auction model yet – and not just as part of a BidX1 clearance.

In the middle of last month Peter Kenny of Knight Frank took to the rostrum with 169 Strand Road, a period 276sq m (2,970sq ft) property on Sandymount seafront in Dublin in need of a major refurb and with an advised minimum value of €1.25 million. There was plenty of interest in the auction room on the day, and the property sold for €1.55 million, 24 per cent above the AMV. Buoyed by this success, Kenny plans another big auction in Sandymount, on Park Avenue, next month. It might be one for Dublin 4 downsizers to watch.

Towards the end of March another interesting sale was that of 151 Castle Avenue in Clontarf, a modest three-bed cottage standing on a sizeable 0.1ha (0.25ac) across the bay in north Dublin. It went on with Sherry FitzGerald with an asking price of €1.2 million and sold to the highest of three bidders for €1.4 million. The site’s development potential is likely to have driven much of the interest.

Speaking of potential, the unusually named Astagob in Porterstown, in Castleknock in west Dublin, was an interesting play when it came up in late February. There was barely a reference in the promotional bumf to the 1870 farmhouse on 1ha (2.4ac) that was actually for sale. Instead all the focus went on the secured planning permission for an architect-designed mansion extending to 660sq m (7,134sq ft). The property went on at €1.1 million, with Coonan Property, and sold for €1.2 million. Not bad considering that’s before the real work even begins.

And it’s not just the €1 million-plus players who are getting in on the action. This week saw Daphne Kaye (out on her own again after a brief dalliance with Sherry Fitz) taking to the auction room with an art-deco two-bed on the beachfront in Bray, Co Wicklow. It went on with an AMV of €575,000 and sold under the hammer for €650,000.