Take a permanent daytrip to Howth for €1.375m

Lamorna is a spacious five-bed, detached bungalow built for entertaining and play 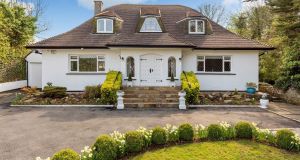 Lamorna was reconfigured in 1995, adding a strawberry Gothic-influenced dormer level 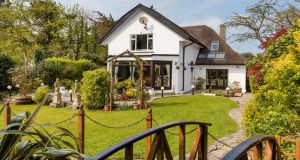 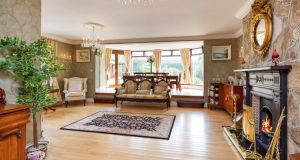 The kitchen was remodelled in 2010, with polished granite countertops added to the south-facing space 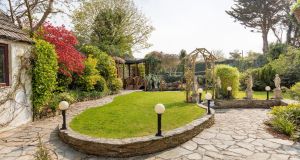 The south-facing garden is set out in ponds and crazy paving, all classic 1970s decorating tropes, and all cool again 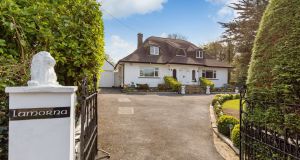 Lamorna, Dungriffin Road, Howth, Co Dublin has off-street parking for up to five vehicles, with electronic gates to the front

To visitors, Howth is a Co Dublin village whose working harbour is beloved by daytrippers who take it over at weekends, thronging the restaurants and the cliff-side walks around the head. But there is another very local unseen side to Howth, whose residents socialise in its rugby, sailing, golf and tennis clubs rather than at the harbour.

Lamorna, a five-bedroom detached bungalow built in the 1950s, will appeal to a family looking for the latter. Bought by the current owners in 1977, it was reconfigured in 1995 adding a somewhat strawberry Gothic-influenced dormer level, inspired by holidays to France.

The house has an impressive entrance hall, where the double-height space soars to beyond 5.5m high

The property, set on 0.3 of an acre, now measures 262sq m (2,820sq ft) and is a fine family home, although the antique brown furniture in its bedrooms may put fans of contemporary living off. It shouldn’t, for what you get is a sizeable house and an impressive C3 BER rating for a property of this vintage, and an equally sizeable south-facing garden.

Its owners liked to entertain in the large, dual-aspect living-cum-diningroom, hosting lunches on the raised dining area, with its bay-shaped window overlooking the property’s grass court. Tennis was the main course on the menu with food served, well, between serves. Although now a bit mossy, this enclosed grassy space could just as easily be used for soccer, GAA or rugby practice, and is an invaluable asset to families of sporty kids.

The dining area overlooks the south-facing garden, which is set out in ponds and crazy paving, all classic 1970s decorating tropes, and all cool again, as is the Howth stone chimneybreast wall and the glass doors that lead from it to the hall.

The house has an impressive entrance hall, where the double-height space soars to beyond 5.5m high. Its pale-oak parquet floor, set out in a herringbone pattern, was only discovered when the owners lifted the carpet that had been covering it.

There’s a sittingroom to the front. The dual-aspect room has a bottled-gas-operated fire – the heating here is oil but there is mains gas on the road.

The kitchen was remodelled in 2010, with polished granite countertops added to the south-facing space. It is lit from above by banks of rooflights, bringing light in from two different directions, east and south, with patio doors leading – via a terrace complete with water feature – out to the garden.

A swooping if somewhat steep mahogany staircase dominates the hall, drawing the eye up to a circular landing, a luxurious use of space rarely seen in modern builds.

The property has five bedrooms, two downstairs, but it is those upstairs that offer something really special in their sense of scale, for this is a dormer with very decent ceiling heights and horseshoe-shaped window enclosures.

The master overlooks the garden, has a big shower ensuite and feels incredibly private. A second, dual-aspect bedroom would make a lovely space for two siblings to share. They could keep each other company while each having a sense of privacy thanks to the vertical half wall that shields each side of the room from the other.

The house has off-street parking for up to five vehicles, with electronic gates to the front, and is asking €1.375 million through agents Sherry FitzGerald.

Childcare: ‘So, you go out and take the child kicking and screaming from the car?’
10