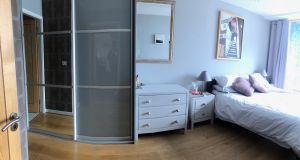 The year is 2050. A guide directs a group of furniture enthusiasts around an exhibition. “In front of you is a Le Corbusier, to the left a classic Starck, but to the right ladies and gentlemen, you will recognise the unique characteristics of a Dunphy original.”

This scenario may or may not have been playing out in my head as I added a second coat of paint to a small bedside table. Herein lies the problem with YouTube tutorials; any one of us can decide to give almost anything a whirl – from overhauling a car engine, to making a wedding cake. The consequences of a lack of experience vary wildly; make a mistake hemming your jeans and you might end up with shorts, but deciding to rewire your house based on watching a 10-minute video online might see you join the sorry ranks of the Darwin Awards. My rule of thumb tends to be that if someone typically requires a five-year apprenticeship to be considered qualified at something, it’s unlikely an upbeat tradesman from Birmingham will be able to teach you over YouTube on your lunch break.

Of course, there are plenty of things that don’t have precarious repercussions, and these are the pastimes and hobbies you will see littering Instagram and Pinterest. Furniture or home makeovers are a big one, and I’ve discovered that a good before and after DIY photo will generate more likes than any political or social comment. A change is as good as a rest so they say (on an aside, this proverb has never made sense to me. A change is nothing like a rest; if you need a rest, a change won’t make the blindest bit of difference to you. Just have a rest, for the love of God).

I have always enjoyed DIY projects – saving money is always welcome, but more importantly, I’ve come to realise it’s a simple form of mindfulness. I had long worried I wasn’t capable of it, that mindfulness was somehow just beyond reach for my deeply cynical brain. But one day, whilst making some shelves for my hot press (an airing cupboard, British pals), I realised by the end of it that not only did I now have somewhere to store towels, but also I hadn’t once worried about the thing I had been frazzled about that very morning. Mindfulness is about focusing on what’s happening right now and taking your thoughts away from negative wandering; what better way to focus your thoughts than with a sander and a tin of paint?

My most recent project was motivated by deciding to replace the wardrobes in my bedroom. The dark and discoloured other bedroom furniture I had disliked for some time would look dated beside the shiny new Sliderobes, but I couldn’t afford to replace everything. Inspired by Marian Keyes’ online posts of her beautiful furniture makeovers, I armed myself with some sugar soap, chalk paint and wax, and set aside a day. I chose a light grey, and had a standard chest of drawers and two bedside tables to complete. These pieces are now more than 13 years old and weren’t originally sealed, which although made them stain more quickly over the years, worked in my favour now as they required no sanding (word to the wise: most Ikea furniture is sealed to within an inch of its wooden life, so always needs to be sanded).

Painting in an apartment around toddler crèche hours wasn’t ideal, but did make me keep up the pace. For this furniture, the process involved washing it down with hot soapy water, followed by scrubbing with sugar soap, allowing to dry and applying two coats of chalk paint (leaving four hours drying in between coats), before finally adding a layer of wax to seal.

I decided against distressing; that seems as illogical as buying a new coat and then tearing a hole in it . . . it will age in its own good time. The most striking transformation came with the joyous addition of new knobs (NB the innuendo on social media when asking for advice on knobs is never-ending). Jumping on the current trend of mismatching knobs, the possibilities are endless. Allowing for drying time, a bit of real-life work in between and park-visits with the toddler, the project took two days, and it wasn’t just the bedroom that felt renewed afterwards.

A kind man with an unwittingly dismissive tone on Twitter told me I’d have had far better results had I used a professional like him. That may well be, but what he didn’t realise was that this job was not just restorative for the furniture; a manageable project like this is good for the soul.