The homegrown candle business is on fire, with several brands going global 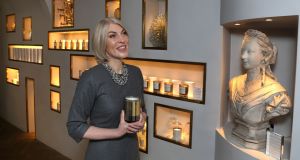 Some 20 years ago the idea that candles, and in particular the fragranced kind, would be a booming business was laughed at, quite loudly by some. Modernity poopoohed the idea that a light source that is as old as time itself would become a fashion item.

But with the indigenous candle business worth an estimated €25-€30 million, it is an area of Irish design where several key players have carved out a niche for themselves, some competing on a global stage.

Part of the appeal is the rise of Scandinavian chic, simple contemporary interiors, with bare blond floors underfoot and much of the atmosphere coming from accent pieces; casually thrown sheepskins and rugs and candles burning at multiple levels.

That ambiance is reinforced by the popularity in pop culture of the Danish word hygge, used to describe cosy and/or charming along with the Swedish word lagom, which describes the Goldilocks idea of a space being in perfect balance or just right.

Woods recently showed her organic collection at Pitti Fragranze in Florence, Italy, a tiny, invitation-only, trade show which attracts the world’s top buyers and noses, and was one of just two Irish brands asked to attend.

Galway-based Cloon Keen Atelier, which has its own shop in the heart of Galway city, was the other. It was the brand’s inclusion in Luca Turin and Tania Sanchez Perfumes The Guide 2018, one of just 19 fragrances that got a five-star review, that garnered it a mention in the FT’s How To Spend It and an invitation to attend Fragranze.

Founder Margaret Mangan, whose candles are hand-poured in Spiddal, Co Galway, says the whole brand is a tribute to Galway.

For Mangan, who with her husband, Jules Checkley, started the business in 2000 when the pair were still working in the film industry, the storytelling aspect is central to what they sell – the candles evoke a moment in time.

Autograph Tree, for example, is a sandalwood, rose, incense and cardamom confection that pays homage to the Celtic Revival and is inspired by the fact that dramatist and folklorist Lady Gregory used to invite guests staying with her at her house at Coole Park, outside Gort, to carve their initials into the trunk of a copper beech tree. Notables include George Bernard Shaw, J M Synge, Augustus John, An Craoibhín (Douglas Hyde, first president of Ireland), GW Russell, WB Yeats and Sean O’Casey.

Fragrance also takes you on a journey, says creative director Mark Van den Berg, who with siblings Orla and David run Max Benjamin from a property set into the side of the Wicklow hills. The home fragrance brand set up in 2007 now has a turnover of €5million.

From its bucolic setting Max Benjamin scents have traversed the globe, recalling the Amalfi Coast, Indian Ocean islands and some of the world’s best-loved cities, like its newly launched Paris in Fall range. Fragranced candles comprise about 50 per cent of its business, and overseas sales are to mainly Nordic countries and the UK, says its creative director Mark. “The further south and east you go the more they favour diffusers as a way of bringing fragrance into the home.”

It also produces a limited edition collection called Voyage. Housed in gorgeous porcelain containers that Mark personally sourced in the Chaozou province of China, where porcelain originated, they first looked to Africa to evoke the souks of Marrakech, the plains of the Masai Mara and Zulu’s soul. It sold really well, with Harrods taking 1,500 pieces and Milan’s top department store La Rinacente also signing up. This decorative range comprises 20 per cent of the business.

“The fact that the product is hand-made in Ireland using natural ingredients is what people keep coming back to,” says Mark.

The success of Voyage led to the launch of Ilum, a much larger format candle that he describes as a piece of interior design in itself. It ranges in price from €99 to €400. Housed in large patterned porcelain vessels, the siblings are targeting decorators directly with this range, which launches a new design in January, called Un Seul Monde, whose pattern is inspired by migration.

When planning new launches Mark looks at overarching trends, like the one in superfoods and superfruits which inspired the launch of White Pomegranate, about €25, now one of its core sellers.

Outside Borris, Co Carlow, Boramic, the parent company of Torc candles, makes a jaw-dropping 75-80 million tea lights, votives, pillars, dinner tapers, and church and fragranced candles per annum – with 13 million of these being tea-lights or night lights. Sales director David Sammon estimates the firm manufactures over a third of all the candles sold in Ireland.

And like the other big traditional players Duffy & Scott and Rathbornes, it started out supplying the church before diversifying.By the turn of the millennium it had begun producing fragranced candles, creating seasonal ranges and employing a designer to make the range more trend focused.

Its current designer, Brazilian Matheus Gomes, has a background in graphic design, and liaises with fragrance houses in the UK and France as well as attending shows in London, Paris and New York to stay abreast of trends.

The retail value of the Co Carlow business is impressive, between €13million and €15million, of which 50 per cent is now fragranced, Sammon says. Its Torc brand houses in contemporary-coloured glass jars, and is stocked at The Kilkenny Group and Carraig Dunn, but it also makes for several big marques including Dunnes Stores, one of the few multiples that stocks Irish-made candles.

Despite falling attendances at Mass 35 per cent to 40 per cent of the business is religious, comprising mainly votives and the large-form birthday-style candles, what were once known as “penny candles”. Sales of these peak three times a year; at Christmas, Easter and during exams in June.

Dublin-based Rathbornes, a candle company that can trace its roots back to a time before Christopher Columbus discovered America, has also broadened its range to include fragranced candles under the brand Rathbornes 1488, the year the company started selling tallow tapers. The Japanese market has been captivated by its heritage story and the clean lines of its packaging.

There is also a resurgence of interest in the dinner taper. Brookfield Farm, on the shores of Lough Derg in Co Tipperary, makes beeswax tapers (€12 for a pair) as well as scented candles (€36) using wax from its very own hives.

In an industry that is waxing rather than waning there are several other notables also worth investigating.

For decorative ambient designs that glow from within Moth to a Flame in Bennettsbridge, Co Kilkenny, is the place to purchase globes that you can use inside and out and lanterns.

In fragranced candles Brooke & Shoals in Greystones the latest launch is lemon, mandarin and magnolia (€19.95) while lemongrass and cedarwood, (€15.95) remains a best seller of the Slane, Co Meath-based The Handmade Soap Company.

But the firm that best evokes the Irish elements is Newtownards-based Field Apothecary’s, whose Peat or Rain, about €38 each, captures the very essence of our great outdoors.

This is a tribute to Eileen Gray’s Transat chair, which the designer created for the terrace of her modernist masterpiece e1027 on the Cote D’Azure. This is the firm’s first architectural fragrance. Created by nose Delphine Thierry, who lives nearby and who was involved in the creation of several Guerlain scents, it contains notes of cement, well-worn leather and pine and cedar trees from France’s Roquebrune Cap Martine coastline. Cloonkeen.com

A decoratively showstopper this candle, which is sold direct through interior designers and on its website only, follows the thinking of fashion brand Fornasetti in offering homeowners a porcelain vessel, sourced from the Chaozou province of China, that you can use after you have enjoyed its olfactory element.

This west Cork-based home fragrance brand uses only organic ingredients and recently opened a shop in Glandore that looks out at the islands of Adam and Eve. Its new Christmas scent, clementine, spice, lavender and rosemary, captures a wild western seaboard’s sense of seasons greetings, and comes in a reusable hand-thrown pot made by a local potter. Watersandwild.com

If you are desk-bound and long to get out outdoors and embrace the misty atmosphere of early winter, infused with the smell of turf fires in the west, then light Field Apothecary’s Rain or Peat candles to transport you there in an instant. Fieldapothecary.ie

This is the only unscented candle listed. While not new these globes continue to bring an ambience that is distinctly contemporary in look, and its form allows you to use it indoors and outside. They come in two sizes, small and large, and you can buy them direct from Moth To A Flame in Bennettsbridge, Co Kilkenny, or from the Kilkenny Design Centre, Kilkenny city, and Ardmore Pottery.